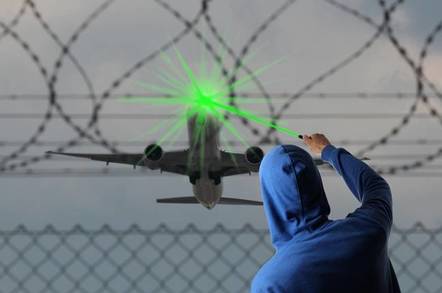 See this? It's illegal. Don't do it

The ban on shining lasers at cars and aeroplanes has been strengthened with a five-year prison sentence now available for those who train their laser pointers on ships, aircraft or air traffic control towers.

"Under the new law, it is a crime to shine or direct a laser beam that dazzles or distracts, or is likely to dazzle or distract, air traffic controllers, pilots, captains of boats and drivers of road vehicles," said a UK government statement as the Laser Misuse (Vehicles) Act gained Royal Assent.

The Act builds on previous laws which made this illegal but did not include the need for prosecutors to prove that the person shining the laser intended to endanger a vehicle. It also lengthens the available prison sentence to five years or an unlimited fine. Existing legislation allowed for a maximum fine of £2,500 and potential prosecution for reckless endangerment, which carries potential prison time.

Under the updated law, a defence is available for those who took "all reasonable precautions" to stop their light beams from catching drivers, pilots, ships' captains or air traffic controllers in the eye.

The problem of laser misuse stretches back to the introduction of cheap, readily available laser pointers in the UK. Though regulations did exist, limiting the power levels available for sale to the general public, these were (and are) virtually unenforced.

Naughty folk had an unfortunate tendency to point these lasers at passing or distant items (clouds, aircraft, cliffs, air traffic control towers, etc) with no thought for the effects on people at the receiving end. Relatively high-powered lasers are easily capable of causing permanent damage to eyesight.

"In 2017, UK airports reported 989 laser incidents to the Civil Aviation Authority. The most affected airport was Heathrow with 107 incidents, followed by Gatwick (70), Manchester (63) and Birmingham (59)," said the government's statement on the successful passing of the Act.

Brian Strutton, general secretary of the British Airline Pilots' Association (BALPA) trade union, added: "Shining a laser at an aircraft is extremely dangerous and has the potential to cause a crash that could be fatal to not only those on board, but people on the ground too."

BALPA has led the charge for stricter laws on laser abuse for many years. ®