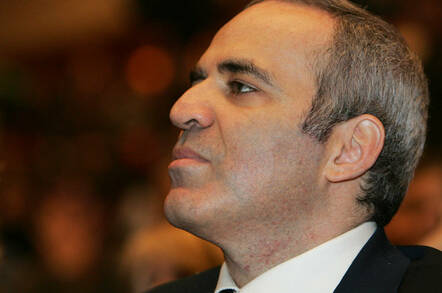 Garry Kasparov, a former Soviet world chess champion and one of the greatest players of all time, has changed his tune about AI since he was beaten by IBM’s Deep Blue.

During a talk at the Train AI conference in San Francisco on Thursday, Kasparov traced the steps that convinced him about how humans and machines might one day work together to create an “augmented intelligence”.

He’s had a lot of time to contemplate the rise of machines. Over 20 years ago, at the height of his career as the world chess champion, he entered a competition to play chess against a supercomputer.

“The day machines would beat the strongest human player had to be the dawn of AI. The machine that would succeed had to be intelligent,” Kasparov said.

In 1996, although he won the first set of matches played against Deep Blue, he knew that his days were numbered. He had lost a single match against the supercomputer and realised it was just a matter of time before machines would be superior.

But he didn’t expect the end to come so quickly. A year later, Deep Blue bounced back to win the second set of matches, leaving Kasparov infuriated. He blamed his defeat on IBM cheating, although he has since retracted his accusations.

There are about 1045 possible moves in chess, and a machine doesn’t have to and can’t memorise them all to win, he explained. “For machines to beat humans, it doesn't have to be perfect it just has to be make less mistakes than a human. Humans eventually get less vigilant and make mistakes from tiredness. Machines don’t.”

Kasparov wasn’t too impressed with Deep Blue, and compared it’s intelligence level to that of an alarm clock.

The Elo rating of chess players, a score used to calculate the skill of chess players, has been creeping up he explained. At his peak, Kasparov was about 2,851 by the turn of the century. Magnus Carlsen, the current world champion had a peak Elo score of 2882 when rated in 2014. Deep Blue’s score was above 2700.

Intelligence as type A, B and C

These numbers have since been smashed by DeepMind’s AlphaZero, which has an estimated 3600 Elo score.

That was a turning point for Kasparov. He labels machines into different types. Type A is a computer that completes tasks by relying on brute force and trying to examine every single possibility to find the best move. Type B machines are more “human-like”, and are able to selectively examine only the most promising options based on applied human knowledge.

AlphaZero doesn’t quite fall into Type B. It was trained by a reinforcement learning technique called self-play. After playing about 60 million games with itself, AlphaGo crushed the top chess computer Stockfish (some experts reckon the competition wasn't quite fair), winning 28 games, drawing 72, and losing none.

DeepMind: Get a load of our rat-like AI. 'Ere, look. It solves mazes and stuff

Unlike all previous chess machines, AlphaZero was not trained by analysing human chess games. “It had zero knowledge of human play. Now we know, machines can generate their own data. AlphaZero has found things we didn’t know about the game,” Kasparov said.

Now, he thinks AI like AlphaZero are like tools that can elevate human intelligence. “At the end of the day, it is for us to even explain when something is successful. It is still for us to define success and machines to perform their duty.”

The same thing happened when DeepMind beat the Go champion Lee Sedol. Although Sedol was thrashed, the moves made by the machine taught him new methods and strategies that were unexplored before.

“AI will help us to release human creativity. Humans won’t be redundant or replaced, they’ll promoted.” Now, Kasparov imagines machines will reach what he calls the third ‘Type C’ stage.

Type C is an augmented intelligence, where machines and humans work together to create smarter tools. Jobs will evolve and adapt, opening up new careers and industries. He envisions a future where humans don't have to become expert coders to work with AI, since machines will be advanced enough to understand and take instructions by listening to the human voice.

“I lost [chess] but I survived, and I thought if you can’t beat them, join them. From now we on we have no choice but to work with machines and make the best algorithms,” he concluded. ®

Chess algorithm written by Alan Turing goes up against Kasparov

Performs exactly the way a real human would

Latest from the coming AI robot apocalypse: we're going to be fine

Of course by "we", we mean educated, well-off Westerners

Cupertino caves to the motherland, it's claimed