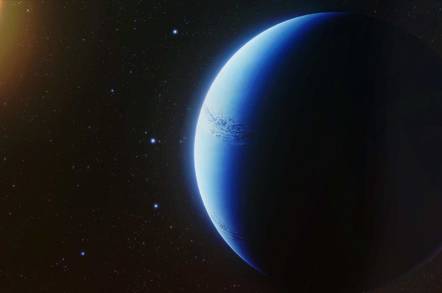 Astronomers have discovered the first exoplanet completely devoid of clouds, according to a paper published on Monday in Nature.

WASP-96b described as a “hot Saturn” for its toasty temperature of 1,300 Kelvin (1,027 degrees Celcius or 1,880 degrees Fahrenheit) and a similar mass to Saturn, is located about 980 light years away in the Phoenix constellation.

“We've been looking at more than twenty exoplanet transit spectra. WASP-96b is the only exoplanet that appears to be entirely cloud-free and shows such a clear sodium signature, making the planet a benchmark for characterization,” said Nikolay Nikolov, first author of the paper and a physics and astronomy research fellow at the University of Exeter.

Scientists probe the chemical composition of exoplanets with spectroscopy. The researchers analysed the data from the Very Large Telescope, to filter the sunlight that passes through the exoplanet’s atmosphere when it transits its host star into its individual elements.

Since each element has a unique configuration of electrons, it can only absorb and emit light of a characteristic wavelength seen in the planet’s spectra.

"Until now, sodium was revealed either as a very narrow peak or found to be completely missing. This is because the characteristic 'tent-shaped' profile can only be produced deep in the atmosphere of the planet and for most planet clouds appear to get in the way," Nikolov explained.

Most exoplanets are shrouded in hazy gas. Studying the atmosphere and clouds are important to figuring how much stellar energy it absorbs and reflects into space.

"WASP-96b will also provide us with a unique opportunity to determine the abundances of other molecules, such as water, carbon monoxide and carbon dioxide with future observations ", said Ernst de Mooij, co-author of the study and an academic from Dublin City University. ®