The Sun will blow up into a huge, glowing bubble of gas during its death 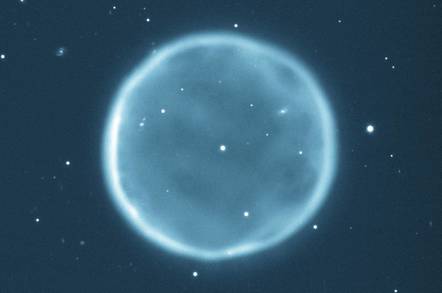 Abell 39, an example of a planetary nebula. The image was taken with a blue-green filter that highlights the light emitted by oxygen atoms. Image credit: T.A.Rector (NRAO/AUI/NSF and NOAO/AURA/NSF).

The Sun will shed a large chunk of its mass to turn into a planetary nebula, a gigantic globe of luminous gas, as it nears the end of its life cycle.

Low mass stars like the Sun will become red giants and then white dwarves when they die. Now, a paper published in Nature Astronomy predicts that in between those stages, the Sun will evolve into a planetary nebula.

"When a star dies it ejects a mass of gas and dust - known as its envelope - into space. The envelope can be as much as half the star's mass. This reveals the star's core, which by this point in the star's life is running out of fuel, eventually turning off and before finally dying," Albert Zijlstra, co-author of the paper and a professor of astrophysics at the University of Manchester, said.

"It is only then the hot core makes the ejected envelope shine brightly for around 10,000 years - a brief period in astronomy. This is what makes the planetary nebula visible. Some are so bright that they can be seen from extremely large distances measuring tens of millions of light years, where the star itself would have been much too faint to see."

At first, scientists weren’t sure if the Sun had enough mass to create the envelope of material in planetary nebulae. It happens for about 90 per cent of all stars, but was only believed to be for stars with double the Sun’s mass.

The computer model described in the paper, however, shows that the hot cores of stars heat up the envelope and it expands at about 30 kilometers per second - three times faster than previous models - when it reaches a temperature of 40,000 Kelvin (~ 39,727 degrees Celcius).

It means that low-mass stars like the Sun will create planetary nebulae that are just bright enough to be visible.

Observations found that brightest planetary nebulae in other galaxies always have the same brightness - about four times as luminous as the Sun. Old, low mass stars should make much fainter planetary nebulae than young, more massive stars. This has become a source of conflict for the past for 25 years.

“We found that stars with mass less than 1.1 times the mass of the sun produce fainter nebula, and stars more massive than three solar masses brighter nebulae, but for the rest the predicted brightness is very close to what had been observed. Problem solved, after 25 years!,” Ziljstra concluded. ®