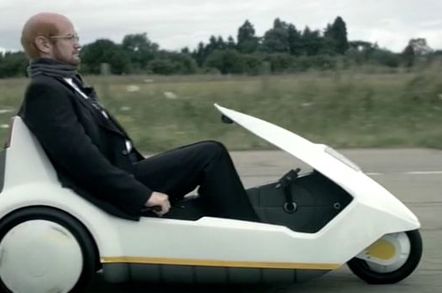 A fresh war of words has erupted over at ailing ZX Spectrum reboot firm Retro Computers Ltd – this time over the corporate involvement of legendary British inventor Sir Clive Sinclair himself.

The latest squabble over the company boils down to a three-way shareholder fight between former MD Paul Andrews and former CTO Chris Smith, current chairman David Levy, and Sinclair Research Ltd (SRL), which is Sir Clive’s corporate presence. Each shareholder owns a quarter of the company, with Andrews and Smith acting in lockstep.

This is a bitter tug of war with Sir Clive, daddy of the original ZX Spectrum console of the 1980s (as well as 1985's heroic 'leccypedalo Sinclair C5 – the bonkers jet-boosted version of which you can see here), serving as the rope.

RCL, as regular readers know, is the company that was supposed to have delivered a ZX Spectrum-themed handheld game console, called the Vega+, to about 4,500 people who paid money for the product via crowdfunding platform Indiegogo two years ago. Since then the firm has delivered nothing, amid excuses and recriminations flying back and forth over what happened to the £513,000 paid to RCL by its customers.

What should have been a retro-themed product that sold like hot cakes and brought joy to greybeard gamers all over Blighty has descended into a horrible, stinking mess that sullies the Spectrum legacy. The struggle for control of RCL is a marker not only for thousands of customers' monies, but the very business model behind crowdfunded products – and for what happens when that crowdfunding process goes wrong.

A pile of cash, Sir Clive, and that console

Andrews and Smith are trying to remove Levy as a director of RCL, along with those Levy appointed as directors after the former pair quit the company in April 2016. They want to do this by calling a shareholders' meeting and voting Levy off the board. Naturally Levy is resisting this attempt to topple him.

With Andrews and Smith controlling 50 per cent of the company, and Levy controlling 25 per cent, the crucial question is who does Sinclair, with the remaining 25 per cent stake in the firm, support? Whoever keeps Sir Clive on their side will be in control of RCL – and the £513,000 that is supposedly still in its bank account.

If SRL opposes Andrews and Smith's attempt to replace Levy, then the status quo remains.

A press release issued a week ago by Andrews and Smith stated that SRL was backing them. RCL, however, has hit back with a statement of its own, with Levy telling El Reg yesterday:

For the avoidance of confusion and doubt, we are pleased to report that Sinclair Research Ltd have advised us that their company is NOT intending to vote for removing the existing directors and that the position of Sinclair Research Ltd is NOT as stated in the "Joint Press Release" of April 27th, 2018.

Andrews and Smith insisted last week's statement about receiving support from SRL was accurate when they issued it.

We have asked the SRL company secretary what Sinclair Research Ltd’s position is on this squabble but have received no reply at the time of writing. SRL itself has three directors listed at Companies House: Sir Clive; his partner Elaine Millar; and Robert Freestone, the company secretary.

It appears likely to El Reg that a behind-the-scenes battle to secure the hearts and minds of Sir Clive and Millar has been taking place between Andrews and Levy.

Who's trying to do what here, and why?

The Register understands Andrews (and Smith's) position is that RCL’s current directors, under Levy, are trying to mislead customers about whether the Vega+ will ever be delivered, with the duo wanting to take back control of the firm they helped found in order to closely examine its books.

Some of RCL’s customers have filed small claims court cases against the company to try and get their money back, as The Register knows.

For his part, Levy disputes Andrews’ allegations and has consistently insisted RCL will deliver, blaming Andrews and Smith for the previous missed delivery deadlines. He has claimed they are trying to destroy the company as revenge for Levy forcing one-time RCL retail distributor Cornerstone Media into liquidation and bankrupting its sole director, Nick Cooper – a personal friend of Andrews'.

Despite public fears that RCL would fold and deliver nothing, the company has repeatedly insisted it will make and distribute the consoles. Its latest pledge is that it will ship some of them by 12 May, though previous self-imposed deadlines have repeatedly sailed past with no action being taken.

Lurking in the background of all this is Indiegogo itself, which is trying to limit the PR damage caused by RCL to its own business model after Luton County Court ruled that the platform’s terms and conditions weren't relevant and that "backers" were actually customers with a legally enforceable contract of sale. If RCL fails to deliver by the end of May, Indiegogo has pledged that it will send in a debt collection agency on customers' behalf.

None of the current manoeuvring appears likely to bring forward deliveries of the original Vega+. Recently RCL has begun alluding to the delivery of a Vega+ V2 instead of the plain old Vega+, which suggests the product that will appear may not be the same as the one originally offered and paid for. ®