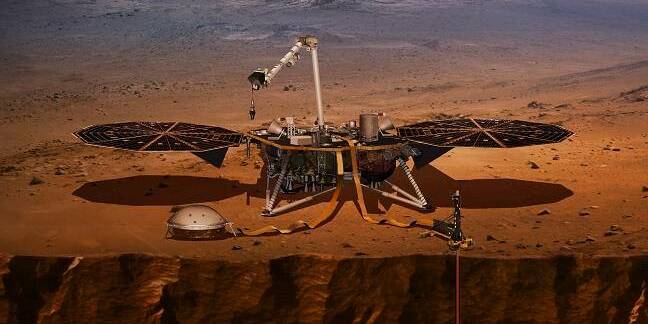 NASA's Mars InSight will launch from California’s Vandenberg airbase tomorrow morning, with the aim of discovering how rocky planets form.

InSight will lift off at 1105 UTC and is intended to be the first mission to peer beneath the Martian surface, studying the planet's interior by measuring its heat output and listening for mars-quakes - seismic events similar to earthquakes on Earth.

The Insight team intend to record up to 100 quakes, in the hope of gaining a better understanding of how similar planets, such as Earth, were formed. The mission will also send a hammer-drill up to five meters into the planet in order to measure heat flow from the interior of Mars. Results from the sensor should give an indication of how energy from within the planet drives changes on the surface.

Officially known as the Interior Exploration using Seismic Investigations, Geodesy and Heat Transport, InSight was derived from NASA’s successful Phoenix Lander, which spent six months sat on Mars nearly a decade ago, looking for signs of water in the soil before succumbing to the Martian winter.

The 358kg lander features a robot arm measuring 2.4 metres, which scientists will use to position instruments on the surface, and solar panels able to generate 600 – 700 watts.

Assuming the launch goes well, InSight will arrive at Mars on 26 November and will stay for a full Martian year - until November 2020.

A two stage Atlas V 401 will send InSight on its way.

Since its first flight in 2002, the Atlas V family of rockets, has suffered just one failure in 2007, when under-performance of the upper stage left two NRO satellites in the wrong orbit (PDF.)

In that instance, both satellites were able to manoeuvre themselves to their intended orbits, but NASA will not have quite the same flexibility with a spacecraft bound for Mars.

Hitching a ride with InSight are two CubeSats, called Mars Cube One. The briefcase-sized spacecraft will test out new deep space communication equipment and, if they survive the journey, could also relay data from InSight as it makes the plunge into the Martian atmosphere.

During a pre-launch briefing, First Lieutenant Kristina Williams of the 30th Space Wing, the Weather Officer for the launch, reckoned that there was an 80 per cent chance that the launch would be shrouded in fog, which would be disappointing for viewers but not a constraint for getting the rocket off the ground.

The launch will be the first NASA interplanetary mission from the US West Coast. ®