Got electrodes in your head? Invest in a surge protector 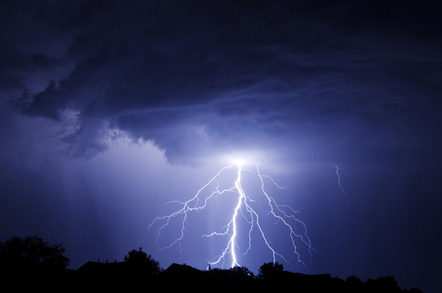 A report published in the Journal of Neurosurgery documented the alarming experience of a patient who got a little too close for comfort to a lightning storm while undergoing deep brain stimulation (DBS).

DBS is used to treat neurological movement disorders, such as Parkinson's disease, and involves inserting electrodes into the brain, attached to an implantable pulse generator (IPG) under the skin. When activated, the electrodes deliver high-frequency pulses to the brain, which can alleviate some of the physical symptoms.

The benefit of DBS is that it shouldn't damage the brain and can be reversed if the patient doesn't respond to treatment.

Unless lightning is involved.

The patient, fitted with a DBS to treat neck dystonia (muscle spasms), was at home when her apartment was struck by lightning. Her television and air conditioner were destroyed and the patient realised the DBS had stopped working when her neck tremors made an appearance an hour after the event.

It appeared that the electromagnetic field (EMF) from the strike had caused the IPG hardware to automatically switch itself off as a safety precaution. The device was undamaged and resumed working when clinicians turned it back on. However, had the patient been recharging the device at the time of the strike, the outcome might have been a bit different.

The system fitted to the patient comprises three devices – an AC power supply, a recharger and the IPG. It is possible to juice up the recharger and the battery of the IPG at the same time, creating a chain that could have reacted quite negatively to the strike – certainly as far as the patient's health was concerned.

Manufacturers of DBS devices have long been aware that EMFs can make them misbehave and, in extreme cases, cause injury if guidelines are not followed. In one unfortunate case a DBS patient suffered permanent tissue damage when having an MRI scan, which caused heating in the brain. Others have seen disease symptoms temporarily worsen following a MRI.

DBS implants carry a list of warnings and instructions on how to avoid or mitigate the risks of EMF at home, work and medical centres. However, researchers believe this is the first time that a lightning strike has interfered with the device.

The scientists recommend using a surge protector when charging, and not charging the battery and recharger at the same time (thus avoiding a chain back to a power outlet).

They also propose that safety recommendations are updated to specifically mention the hazards of EMF interference from natural phenomena such as lightning. Failing to realise that a DBS device has turned itself off could have nasty consequences for patients. ®