The second most abundant element has proven surprisingly hard to detect 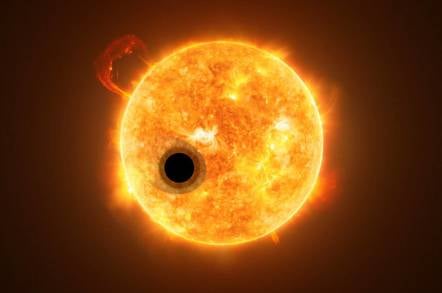 WASP-107b in front of its star - artist's impression

Astronomers have detected helium floating around in the atmosphere of an exoplanet for the first time, according to a paper published in Nature on Wednesday.

The discovery was made after a team of scientists probed WASP-107b with the Hubble Space Telescope. It's an exoplanet located about 200 light-years away from Earth that orbits its parent star in less than six days.

Light passing through the upper atmosphere of WASP-107b was processed using a spectrometer to reveal helium’s signature absorption lines. Due to the strong helium signal, researchers estimate that the gas is plentiful in the atmosphere, with helium clouds probably extending tens of thousands of kilometers out into space.

Powerful solar rays emitted from its host star are stripping the atmosphere and it's probably losing approximately 0.1 to 4 per cent of its atmosphere's total mass every billion years.

Exoplanets from another galaxy spotted – take that, Kepler fatigue!

"Helium is the second-most common element in the Universe after hydrogen," said Jessica Spake, lead author of the study and a PhD student at the University of Exeter.

"It is also one of the main constituents of the planets Jupiter and Saturn in our Solar System. However, up until now helium had not been detected on exoplanets - despite searches for it."

That’s because it’s tricky to detect, Spake explained to The Register.

“There haven’t been too many telescopes with spectroscopic capabilities covering the wavelength of 10,830 Angstroms - corresponding to the absorption line of helium that we detected," she said.

Most researchers normally study atmospheres using ultraviolet or optical wavelengths instead of lower wavelengths like infrared.

Spake said she hoped the new discovery will prompt more researchers to use new methods at lower wavelengths to analyse the atmosphere of more exoplanets. ®