US techies: We want to see Pentagon's defence of winner-takes-all cloud contract 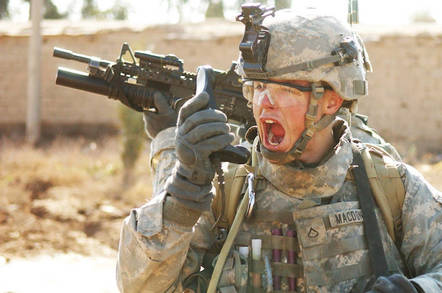 The Pentagon's decision to hand a multibillion-dollar cloud contract to one vendor has come under renewed scrutiny, after an industry group urged Congress to make public the department's reports on the proposals.

The IT Alliance for Public Sector wrote to the House Armed Services Committee this week to voice concerns about the Department of Defense's plans for the Joint Enterprise Defense Infrastructure (JEDI) Cloud programme.

The group, which is a division of the Information Technology Industry Council, includes a number of companies understood to be unhappy with the bid, such as IBM, Microsoft and Oracle – along with AWS, which is said to be the frontrunner for the contract.

In its letter, published (PDF) by US government tech site NextGov, the group said awarding the contract to one vendor goes against procurement best practices, and would increase technology lock-in, damage innovation and dissuade firms from entering the public sector marketplace.

"The pace of innovation and intensity of competition among our member companies in the cloud marketplace portends great benefits to DoD and the entire public sector. As competition intensifies, prices fall, innovation accelerates, and performance improves," the letter said.

"The current strategy dilutes the benefits of best practices, strongly increasing the likelihood of vendor and technology lock-in, and negatively impacting innovation, costs, and security.

"Moreover, it sends an ominous signal that competitors should not invest in the public sector marketplace."

The DoD would not be the first organisation to struggle with a multicloud environment – a report released yesterday by IDC found that only a small minority of European organisations have taken sufficient steps towards that goal.

Michael Ceroici, research analyst at IDC said that, although the perception of multicloud infrastructure as an end goal "resonates" with European organisations, "there remains uncertainty over what a multicloud strategy looks like and how this strategy should be disseminated within an organisation".

However, the Pentagon's plan has come under fire because of the length of the deal – it could run for a maximum of 10 years, which critics have pointed out is almost equal to the age of the cloud market - and because it seems to favour AWS.

The DoD has defended its position by saying the aim is to reduce complexity in its "fragmented and largely on-premise computing" storage systems and denied that it already had a winner in mind.

Despite these reassurances, Congress used this year's spending bill – passed in March – to order the Pentagon to publish a pair of reports on its cloud computing plans.

These are expected to be delivered by next Monday, 7 May – ahead of the final request for proposals for the contract, due a week later – and ITAPS said that Congress should make these reports publicly available, in the interests of "robust, transparent engagement" with industry.

"Faced with challenging budget limitations and increasing global threats, DoD must leverage the full strength of its buying power to motivate downward competitive pressure on pricing while promoting innovation and avoiding long-term, single-source or technology lock-in," the group said.

"The cloud is only as secure, reliable, and competitive as the solutions that comprise it." ®