Now that Kubernetes has won, DigitalOcean takes a late dip in K8s 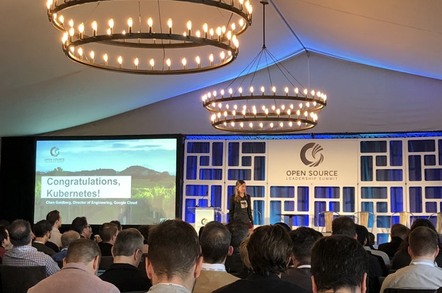 Now that Kubernetes has become the de facto standard for overseeing software containers, it's all but obligatory for cloud platform vendors to offer the software as a managed service.

Google, which created Kubernetes before turning it into a model open-source project, sells its paid service under the name Google Kubernetes Engine. Microsoft began doing the same last October with its Azure Kubernetes Service. And Amazon last November waded into pool with its Elastic Kubernetes Service and an even more hands-off variant called Fargate.

Not to be left behind, DigitalOcean will test the water on Wednesday by announcing its own take on the open-source dish: DigitalOcean Kubernetes.

Scheduled to debut in June through an early access program, with general availability planned for later in the year, DigitalOcean Kubernetes works in conjunction with the cloud platform's product suite. That means customers will have access to DigitalOcean's block and object storage, firewalls, load balancers, and continuous integration options in their Kubernetes clusters.

The company says it will store metrics, logs and events for each node separately, so the analytics data isn't lost if the node goes away.

Shiven Ramji, in a phone interview with The Register, said the company has two primary reasons for betting on K8s, as the orchestration software is sometimes called.

First, he said, a lot of businesses are already using Digital Ocean to run Kubernetes on their own and they want support, because the software is rather complicated. And then, he said, a lot of smaller customers and individual developers who have not yet shifted to containerized workloads, or are about to, need some help getting there.

"Kubernetes for an average developer is complicated and difficult to use," said Ramji.

One point of differentiation, he said, will be the company's tutorials, which tend to be well-regarded as learning resources.

The company, popular among businesses and developers with limited resources, also plans to compete on price. "Our price is very, very competitive," he said.

Looking ahead, Ramji said DigitalOcean may develop a marketplace for cloud-related services. The company is also looking to integrate other Cloud Native Computing Foundation projects into its platform.

As a sign of its commitment to Kubernetes, Ramji noted that Digital Ocean is upgrading its financial support for the CNCF from a silver membership to gold.

Asked how the push toward serverless computing might affect its interest in Kubernetes, Ramji said he expected the two technologies to co-exist.

"It's not like it's all serverless or all containers," he said. "I think it will be a hybrid of the two. There are still tons of use cases where containers or Kubernetes will be a good solution." ®