UK Parliament roars: Oi! Zuck! Get in here for a grilling – or you'll get a Tower of London tour 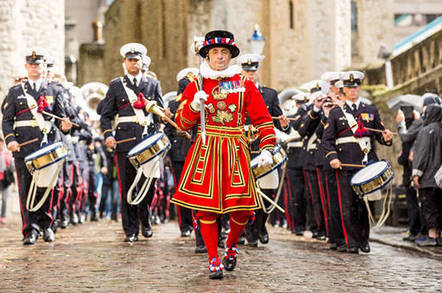 UK lawmakers have threatened to have Facebook CEO Mark Zuckerberg dragged kicking and screaming to Parliament if he doesn't attend a hearing about the social media giant's dodgy practices in the next month.

In a letter [PDF] sent on Tuesday to the head of public policy for Facebook's UK office, Rebecca Stimson, the head of a key Parliamentary committee, Damian Collins, threatened to issue a formal summons against Zuckerberg if he doesn't agree to attend one of its sessions digging into fake news and privacy.

"While Mr Zuckerberg does not normally come under the jurisdiction of the UK Parliament, he will do so the next time he enters the country," Collins warns. "We hope that he will respond positively to our request, but if not the Committee will resolve to issue a formal summons for him to appear when he is next in the UK."

As it turns out, The Zuck will be close by later this month. "Following reports that he will be giving evidence to the European Parliament in May," the letter notes, "we would like Mr Zuckerberg to come to London during his European trip. We would like the session here to take place by 24 May." It gives Facebook until May 11 to confirm that Zuckerberg will come or face the wrath of the committee.

In real terms, the summons would not result in the CEO being arrested or forcibly taken to Parliament nor the Tower of London – those days are long gone – but it is a bad idea to infuriate lawmakers in a country where you do a lot of business and have employees and offices. And some 40-million-plus citizens using your thing.

What would most likely happen is that one of the House of Commons security team – called a serjeant at arms – would hand deliver a summons to Zuckerberg while on British territory. It's a pretty forceful reminder that no matter how much money you have, you are still bound by each country's laws. Even Rupert Murdoch agreed to attend a Parliamentary investigation after receiving a summons.

Unless Zuckerberg wants to avoid traveling through Heathrow, or any corner of what's left of the British empire, for the rest of his life, it's therefore a good idea to go along with the committee's "invitation." But there are also good reasons why he many not want to. Conservative MP Collins makes it quite plain that he intends to grill the Facebook CEO over his company's policies.

The letter begins by noting that the committee was not happy with the answers Facebook's chief technology officer Mike Schroepfer sent to an earlier hearing.

"The Committee feels that the evidence lacked many of the important details that we need," notes the letter, before listing no less than 39 "unanswered questions/points for follow up."

As chairman of the Digital, Culture, Media and Sport Select Committee, Collins has repeatedly accused Facebook execs of understating the risk of their users' data being grabbed, stored and used without their consent. He's not a fan of the company.

Facebook seems to share a similar disdain of Collins and the committee: it has repeatedly stonewalled questions and Zuckerberg has not once but twice refused to attend its hearings.

It doesn't help either that soon after the committee quizzed Facebook exec Simon Milner in February, during which he claimed that dodgy data outfit Cambridge Analytica did not have Facebook data, it emerged that it did in fact have Facebook data – on millions of people.

Lawmakers in Singapore then won global recognition when they subsequently grilled Milner on the same topic and repeatedly slapped down what internet users saw as a supremely arrogant attitude. A video of the encounter went viral.

When Zuckerberg then appeared at the US Congress, it seemed that half the world stopped what they were doing to watch the pale-faced, cushion-enhanced CEO answers questions.

Collins and the UK Parliamentarians want their time in the sun – and they are damned if they are going to miss it. ®