Let's be Frank: Bloke drags Google to the US Supreme Court over $8.5m privacy payout 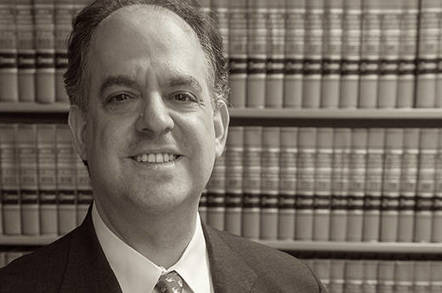 Now that's using your Ted ... Frank is going up before the Supremes

Interview Ted Frank has hit the equivalent of a legal jackpot: a hearing in front of the US Supreme Court.

The chance to argue a case in front of the United States' highest court comes after nearly 10 years of fighting in a very specific area of law: class action lawsuits.

Frank started the non-profit, public interest law firm Center for Class Action Fairness back in 2009 in order to push back against what he says are "unfair class action procedures and settlements" where the people being represented in the legal system are given a raw deal thanks to "self-interested lawyers."

This particular class action lawsuit is especially timely. It covers an industry and a topic that sits at the very top of societal concerns in 2018: tech and privacy.

It may seem ironic then that Frank will be arguing against a $8.5m settlement dragged out of search engine giant Google for violating its users' privacy.

But the issue is not that Google broke privacy rules by revealing users' search terms to third-party websites, or that it agreed to pay a huge fine to address that lapse, but where the money will actually go.

Of the $8.5m that Google has agreed to pay out, not a single cent will go to the actual users whose privacy was violated. It will instead go to the lawyers that brought the case on behalf of those users ($2.125m, no less) and a group of seven organizations that the lawyers, along with Google executives, decided should become "cy pres" recipients.

Those recipients have been controversial from the moment they were named: three of them are law schools, and just so happen to be the same law schools that the lead lawyers went to; and the remaining four are organizations that Google has repeatedly given money to, in large part because they share the same values and goals as Google itself.

The settlement is transparently dreadful: something that has led to it being repeatedly questioned by judges overseeing the case, appealed to the Ninth Circuit Court of Appeals, and now to the Supreme Court.

"When you tell people about the settlement, and where the money will go, they almost always laugh," Frank told The Register just hours after he was informed he was going to make his case in front of the nine Justices.

His position is quite clear: the use of cy pres – pronounced, fittingly, "sigh, pray" – should be a last resort, and if used, there should be no conflict of interests or even the appearance of a conflict, for those involved in drawing up the list for who gets the money.

The Google case is so clear-cut with lawyers and their law schools getting millions of dollars and actual users getting nothing that it represents what Frank says is a "clean vehicle" for the Supreme Court to rule on. He's been on the lookout for such a case for a decade in order to make the system fairer, and now he has found it.

"This isn't relief," he notes, "this is the illusion of relief. And the attorneys get to take the credit." Harvard University, Stanford University and the Chicago-Kent College of Law will be delighted to receive millions of dollars in free money. What's less clear is why they should get it.

In theory, the cy pres concept is a good one: it allows money to be given to an organization different to the one intended but which serves the same goals. It's a French term that means, effectively, "as near as possible" and it was used in wills where people bequeathed money to a certain group which no longer existed when they died.

In 1986, California extended that concept to class-action lawsuits, and other states followed. Companies could be sued on behalf of their customers and then the money given to organizations that promote their interests. So, rather than, say, everyone receive $1 from a company that sold a defective product, millions of dollars could be given to an organization that is dedicated to making sure new products are safe.

But, as tends to happen whenever money is involved, the system has been increasingly abused. The internet era has helped in that: a single policy failing at a company that has millions of online users all over the world means that there are potentially millions of claimants.

Faced with the difficult task of locating vast numbers of people in order to give them small amounts of money, courts have increasingly approved the idea of cy pres recipients getting the money in place of individuals.

Frank however has some startling examples of where this approach has gone awry. "I have a case where the money went to an ex-wife's charity. And there's one in the Third Circuit – also Google – where the attorney's own charity, where he is chairman of the board, is the recipient."

He cites another case when the cy pres recipients are all universities in San Diego – and it just so happens that all of the lawyers and the judge went to those universities. "It is a continuing problem, and we need stronger rules," he summarizes.