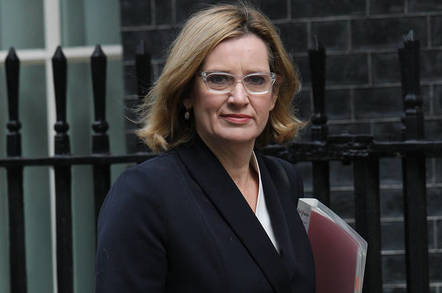 Rudd has stood down after it was revealed she had set immigration removal targets, contrary to her own denials in Parliament

Amber Rudd threw in the towel late last night and resigned as Home Secretary over her mishandling of an immigration scandal.

Rudd, who scraped through the 2017 general election with a majority of just 346 votes from more than 52,000 cast, quit at 10pm on Sunday night after political pressure mounted over targets set for the removal of foreign-born people who did not have the right paperwork to stay in the UK.

Last week the Home Secretary had told MPs she did not set such targets; a memo leaked to the Guardian newspaper showed otherwise.

People targeted by Home Office officials included those who settled in the UK in the late 1940s and early 1950s, known as the Windrush generation. The first arrivals came aboard the troopship HMT Empire Windrush from the Caribbean, having been invited by Britain to help rebuild the country’s shattered economy after WWII.

Under the laws of the time, all British subjects were automatically regarded as full British citizens. In keeping with a spirit of Britishness long since abandoned to the history books, one generally did not need formal papers to prove one's rights, the wartime generation's memories of Nazi Germany's deadly insistence on paperwork still being painfully raw.

In the world of technology policy, Rudd will be remembered as an unabashed Luddite who proudly flaunted her ignorance of how the world works, making up for her lack of knowledge with her loud demands that foreign tech companies bend the knee to her ideas – a policy that disintegrated when she was given such a stiff ignoring that she was forced to tour the US in the hope of cornering tech execs at home.

Rudd was also a devoted enemy of encryption technology and its use by ordinary people, declaring on live national TV last year: "We need to make sure that our intelligence services have the ability to get into encrypted situations like WhatsApp."

This appeared to stem from a false belief that backdoors can be inserted into encryption technology without destroying its USP.

Rudd's most infamous proclamation was that tech workers who "understand the necessary hashtags" needed to just shut up and make her impossible visions reality. That gaffe resulted in a junior minister being wheeled out in order to convince us that her master actually meant to say "hashing", in the context of stopping uploads of child abuse material – a move that revealed Rudd struggled to grasp the basic terminology of the technology world, let alone its higher workings, as she insisted on tighter regulation.

Rudd's successor has just been announced as Sajid Javid, who is currently the minister for Communities and Local Government. A former banker, Javid is also a junior one-time Treasury minister. ®