Disks down overall and SSDs slide 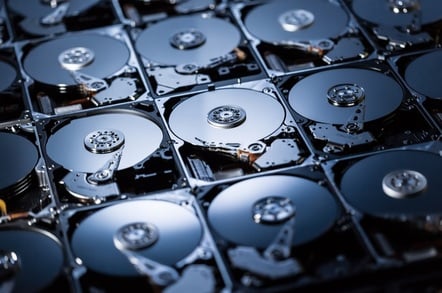 Western Digital shipped a whole load of spinning bits into enterprise and hyperscale data centres in its third fiscal 2018 quarter, although overall disk units sold dropped 15.5 per cent on the year.

This was attributed to debt costs. WD says non-GAAP net income was $1.1bn, which excludes this, well up on the year-ago $716m.

The disk and SSD-flinger generated $1.0bn in cash from operations during the quarter, up 3 per cent year-on-year, ending with $5.1bn total cash, cash equivalents and available-for-sale securities. It recorded $3.3bn dollars in operating cash flow, an increase of 34 per cent.

The bulk of the Data Centre Devices business came from high-capacity disk drives and hyperscale data centre build-out, with SSDs playing a minor role, according to CEO Steve Milligan in the earnings call.

Milligan laid on the indirect self-praise: "The power and agility of our platform and our global team's sustained focus on operational execution drove another quarter of strong financial performance for Western Digital. We saw particular strength in our high-capacity enterprise hard drives, which achieved record quarterly revenue."

And so they did. Although total disk drive shipments were down 15.5 per cent annually to 36.4 million, enterprise drives at 7.6 million were up 31 per cent from the year-ago 5.8m. Other drive category shipments – notebook, desktop, consumer electronics – were all down on the year, although branded drives were up slightly at 5.1 million compared to 4.9 million a year ago.

Its SSDs also face a capacity-increasing transition from maturing 64-layer 3D NAND to 96-layer technology in 2019, with production starting in the third quarter this year and ramping up.

Cooperation with Toshiba for NAND production is back on track after the disruption caused by Tosh's intention to sell a net 60 per cent of its interests in the joint venture to a Bain Capital-led consortium.

Milligan referred to this, saying: "Our joint venture operations with Toshiba Memory Corporation continue to perform exceptionally well and our plans for continued joint investments in Fab 6 and Iwate remain on track." Initial Fab 6 output is expected in the third quarter.

Declining SSD sales were touched upon in one exchange in the earnings call. Mark Moskowitz of Barclays Capital Inc. asked: "Is the composite revenue of solid state ... improving versus the last few quarters where it kind of seems like it was kind of going sideways or maybe even down on a year-over-year basis?"

Milligan was somewhat defensive, not admitting to a non-seasonal decline. "I don't know if we can comment. I mean, I know it was down seasonally, but that's consistent with seasonal revenue trends. But we haven't provided specific breakout in terms of Flash-based memory or Flash-based revenue versus hard drives.

"But we are seeing good momentum in terms of our Flash-based products. And so, things are in good shape in that regard."

No chips for you! Toshiba takes flash off the menu for WDC

Court orders only prolong bid process, and winter is coming