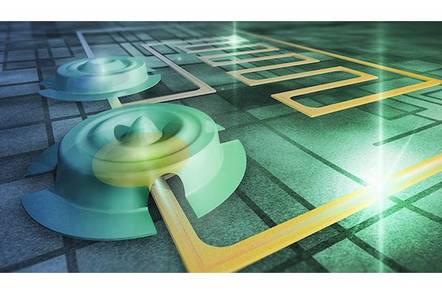 Gravitational wave measurements, and quantum computing and communications are just two applications of an international experiment that created entanglement between objects large enough to be visible to humans.

At 15 microns, the “drumheads” described in this paper at Nature are of the scale of a human hair, much larger than the photons or atoms that have been the staple of entanglement experiments since the 1970s.

Working at the macro scale offers two important advantages. First, such objects can interact with both photons and microwaves, and could thus act as a channel between quantum communication systems (using photons) and microwave-based quantum computers.

Second, a mechanical system that can be quantum-controlled could be the basis of instruments to measure phenomena such as gravitational waves.

The abstract of the paper explains the researchers took two micromechanical oscillators, and coupled them to a microwave-frequency electromagnetic cavity “that is used to create and stabilise the entanglement of the centre-of-mass motion of the oscillators”.

As described in the pre-press version of the paper (at arXiv), the right measurement setup “would allow for infinitely precise reconstruction of classical forces driving the oscillators”.

As one of the authors, Matt Wolley of the University of New South Wales, wrote at The Conversation, the experiment was carried out in the laboratory of Professor Mika Sillanpää at Aalto University in Finland.

The vibrating circular membranes involved trillions of atoms, and were entangled “through careful driving of a superconducting electrical circuit to which both were coupled.”

The superconducting circuit was cooled to around .15 Kelvin (-273° Celsius) for the experiment, and in the experiment, entanglement was maintained for nearly 30 minutes.