Want to make a super-earth? Bring on the frikking lasers 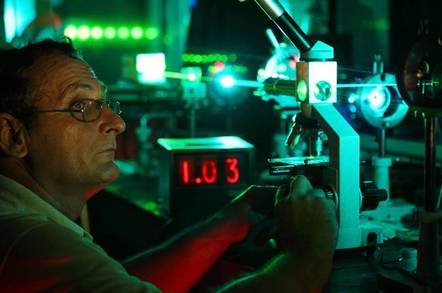 A team of physicists have attempted to recreate the internal conditions of a ‘super-Earth’ planet in a lab, by shooting laser beams at iron samples.

Super-Earths are a type of exoplanet. They have a higher mass than Earth, but are not as massive as Uranus and Neptune. The giants are about 15 and 17 times the mass of Earth.

A paper published in Science Advances describes how scientists can study super-Earths practically, by simulating its rocky core. Intense lasers beams were blasted onto two different iron samples. One resembles a closer match to Earth’s core, and the other has higher levels of silicon.

Previous research has shown that if super-Earths have radii less than about 1.7 times Earth, it probably has a solid, rocky core. Any larger and they tend to be more similar to Neptune, where they don’t have a clear defined surfaces and are enveloped in layers of gas.

It’s challenging to reproduce the crushing pressures of super-Earths that can reach ten times as much as the center of Earth, June Wicks, lead-author of the study and an assistant professor at John Hopkins University, explained to The Register.

“We shoot extremely powerful lasers at samples and can reach the highest intensity in short bursts, which ultimately limits the timescale of our experiments," she explained.

"These experiments are challenging not only because we are generating extreme pressures in our sample, but also pairing them with a bright X-ray source, which we also create by focusing bright lasers on metal foils. Coordinating the pointing and timing of such powerful lasers with such accuracy is a huge feat achieved by the team of operators at the Omega Laser”.

The Omega Laser at the University of Rochester can shoot 60 beams to focus up to 40,000 joules of energy onto a target less than 1 millimeter in diameter, in approximately one billionth of a second.

The simulation lasts only for about a few billionths of a second. Scientists can build up a picture of the internal structure of the samples by seeing how the X-rays are diffracted. They found that at ultrahigh pressures, the lower-silicon alloy formed a dense hexagonal crystal structure, whilst the higher-silicon alloy created cubic crystals.

“This atomic difference has enormous implications," said Wicks. "Knowledge of the crystal structure is the most fundamental piece of information about the material making up the interior of a planet, as all other physical and chemical properties follow from the crystal structure."

It affects a planet’s magnetic field, how heat is dispersed, and allows scientists to estimate a planet’s mass and radius. The researchers hope to include different elements in future iron alloy samples.

“Next we will look at other candidate elements such as carbon and oxygen. We will incorporate these results into models of Super Earths such as the one we showed in the paper and ask what is the effect of light elements on key parameters like internal pressure and core size,” Wicks told El Reg. ®