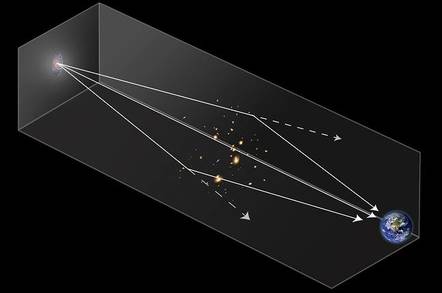 Gravitational lensing ... Light rays from a distant object are bent by a galaxy cluster making it appear brighter to an observer on Earth. Source: NASA, ESA, A Feild and F Summers (STScl)

While European Space Agency (ESA) scientists are breathless with excitement at the volume of star survey data received from the Gaia satellite, NASA researchers are comforting themselves with what their big new telescope might do, should it ever actually make the trip into space.

Researchers, writing in The Astrophysical Journal, theorise that by using gravitational lensing and quite a lot of luck, it may be possible to magnify the brightness of a distant star by 10,000 times or more, making it detectable by instruments on board the JWST.

Gravitational lensing occurs when the light from a star is bent and magnified by a distribution of matter – like a cluster of galaxies – between the light source and the observer.

The effect can magnify the light by between 10 and 20 times, which was good enough for the ageing Hubble Space Telescope to image the farthest star ever seen, named Icarus, but not enough for the JWST to peer deeper.

To go further, the star, galaxies and observer must be perfectly aligned, resulting in the magic 10,000 times amplification of the star's light. The effect would only last a few months, which should be enough time to identify stars formed in the hydrogen and helium of the early universe.

The same technique may also allow researchers to see accretion disks around the first black holes. While the team expects early stars to have been short-lived – exploding into supernovae after a only a few million years – a black hole feeding on a companion star could shine for as much as 10 times longer.

Lead author of the paper Rogier Windhorst, of Arizona State University, said: "Looking for the first stars and black holes has long been a goal of astronomy. They will tell us about the actual properties of the very early universe, things we've only modelled on our computers until now."

There are, however, no guarantees of good fortune, as Windhorst observed: "We just have to get lucky and observe these clusters long enough. The astronomical community would need to continue to monitor these clusters during Webb's lifetime."

With the JWST carrying enough fuel to last for 10 years, and probably longer with careful management, scientists could be in for a long wait. ®