That's no moon... er, that's an asteroid. And it'll be your next and final home, spacefarer

Let's take a peek at your cosmic Nina, Pinta and Santa Maria 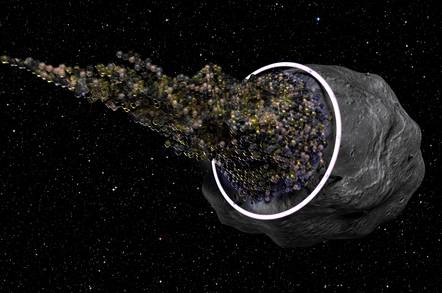 Students and eggheads are designing a futuristic spaceship from an empty asteroid shell capable of housing astronaut crews as they slowly move between stars on trips that could last hundreds of years.

The TU Delft Starship Team (DSTART) – based at the Delft University of Technology in the Netherlands – are working on a project called Evolving Asteroid Starships (EAS) to develop new designs for habitats out in space. Since we can't go anywhere near light speed, the EAS aims to conceive a ship that will last many human lifetimes before reaching its goal.

In other words, if you catch a ride on one of these things, you won't live long enough to see it arrive, but you can at least keep it running before the next generation takes over.

“In light of our insatiable appetite for exploration, it is inevitable that the human species will ultimately travel outside of the known solar system. It is the next step in human evolution,” said Angelo Vermeulen, who is leading DSTART and is a systems engineering PhD student at TU Delft.

At the moment, the International Space Station (ISS) is the only space colony in orbit. Normally up to six astronauts live and work at the ISS for about six months before returning home, although sometimes that number rises higher as crews swap in and out.

But for longer manned-missions, Vermeulen believes that living quarters will need to be upgraded. “We need self-sustaining and evolvable space technology capable of enduring the many decades needed to journey from our Solar System to another,” he said on Wednesday.

The idea is not so far-fetched, considering that the European Space Agency has embarked on a programme to build a sustainable system able to convert organic waste and carbon dioxide into oxygen, water and food for future space travel.

It’s known as the Micro-Ecological Life Support System Alternative programme or MELiSSA for short. There is an experiment with a pilot plant at the Autonomous University of Barcelona that involves airtight containers known as ‘bioreactors’ growing algae capable of producing enough oxygen to keep gangs of rats alive for months at a time and in return the rats produce carbon dioxide for the plants.

“The MELiSSA concept gives the starship its baseline life support,” said Vermeulen, a biologist and artist who served as crew commander of the NASA HI-SEAS Mars simulation base in Hawaii in 2013. “Meanwhile, we’re also integrating other technologies such as 3D printing and asteroid mining into our design.”

Don’t get too excited, however, the EAS project is just a proof of concept and there are no concrete plans to build it just yet.

The DSTART team are expected to present their first prototype simulation, to consider the best methods of travelling across space for long periods of time, at the AgroSpace-MELiSSA workshop in Rome, Italy, in May. ®

Houston? What does ‘No SD’ mean? Is this thing even on?

You always wanted to be an astronaut, right? Careful: Space is getting more and more deadly

For those planning an out-of-this-world trip, radiation is on the rise