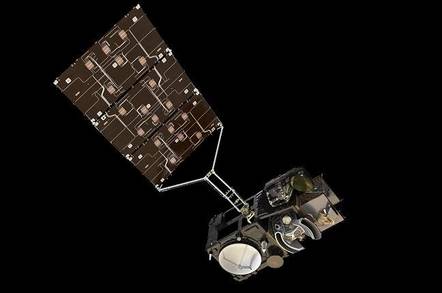 The European Space Agency (ESA) is all a-quiver at the prospect of the second Sentinel-3 satellite launch, due this evening atop a Russian Rockot launcher.

The spacecraft will ride to space at 1757 UTC on 25 April from the Plesetsk Cosmodrome in northern Russia aboard an elderly converted Intercontinental Ballistic Missile (ICBM).

A newer upper stage, the Briz-KM, will do the work of getting Sentinel-3B into its 815km polar orbit.

Sentinel-3B joins its sibling, Sentinel-3A, which was launched in February 2016, as part of the European Commission's Copernicus programme.

Copernicus is a monitoring programme, focusing on oceans and able to measure the temperature, colour and height of the sea surface as well as sea ice thickness. Over land, the satellite duo will be used to track land usage, measure the height of rivers and lakes and monitor wildfires and vegetation.

The identical Sentinel-3A and B satellites weigh in at 1,150 kg and are expected to last seven years (although the pair contain enough consumables to last 12 years if nothing important breaks and funding keeps flowing).

Having a constellation of two satellites will result in global coverage of the land and ocean colour instruments every two days.

Rockot, which can loft up to 2,140kg into low-Earth orbit, is based on the venerable SS-19 ICBM.

Rockot's record is relatively good, notching up 24 successful launches since it moved to Plesetsk from Baikonur in 2000.

ESA will be trying not to think too hard about 2005's CryoSat launch aboard Rockot, where a failure of the second stage to shut down due to a programming error in the Briz-KM upper stage resulting in a big bada boom.

Boffins ended up waiting until the 2010 launch of CryoSat-2 aboard a Dnepr launcher from Baikonur.

The Briz-KM has a troubled history, with subsequent failures stranding a Russian Geo-IK-2 satellite in a much lower-than-planned orbit in 2011, and a botched deployment in 2013, leaving one Russian comms satellite tumbling and two others in the wrong orbit.

With 10 successes since the last failure, including Sentinel-3A, confidence is high that Sentinel-3B will successfully join its sibling in orbit. ®