The only thing 'private' was the parts you were leering at, friend 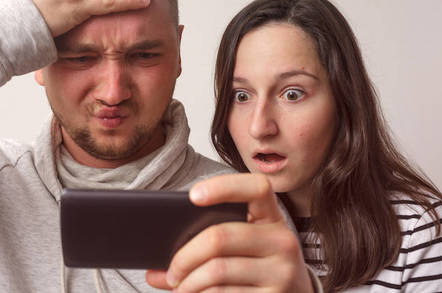 Netizens have the wrong idea about what their web browser's "private" or "incognito" mode actually does.

This is according to researchers at the University of Chicago, in the US, and Leibniz University Hannover, in Germany, who this week declared that folks mistakenly believe that by enabling the incognito browsing mode, they are fully shielded from online tracking and malware.

It's a little like some Tesla owners thinking Autopilot is, judging by the name, fully autonomous driving, rather than super-cruise-control.

The uni study [PDF] showed 460 volunteers a fictional browser called Onyx that used one of 13 different private browsing modes taken from actual browsers, such as Chrome, Firefox, Edge, or Brave. Participants were shown the private browsing windows along with hypothetical scenarios, and asked whether they thought their data would be kept private in this private mode.

It gets worse: 27.1 per cent of users believed private mode offered them better protection against malware, and 25.2 per cent said they believed that setting the browser to private mode would obscure their public IP address.

"We found that browsers’ disclosures fail to correct the majority of the misconceptions we tested," the researchers wrote. "These misconceptions included beliefs that private browsing mode would prevent geolocation, advertisements, viruses, and tracking by both the websites visited and the network provider."

While ignorance plays a major part in the problem, the uni brainiacs said that developers aren't helping matters much when they refer to their incognito browsing modes as being a "private" setup that would guard users from tracking or data collection.

"The term 'private' is heavily overloaded, and our results suggest the name 'private mode' implies unintended meanings," the researchers concluded.

"When disclosures claim users can 'browse privately' (Chrome), users may refer back to their broader conceptualization of privacy."

Rather, the eggheads said, browser makers should be more clear on just what their incognito browsing modes do and, more importantly, don't do to cover up users' tracks. ®

If you really want to hide your public IP address, and geo-IP location, try using Tor, or VPN to your own throwaway box using Algo or Outline. If you use a VPN, you'll still be identifiable from your VPN server's public IP address, but you get the added bonus of encrypting all traffic between yourself and the VPN instance. To avoid malware, try using Google's Safe Browsing or Microsoft's Windows Defender Browser Protection. Consider installing an ad-blocker, such as uBlock Origin, to stop malicious scripts, thwart trackers, and prevent bad adverts from loading – but please whitelist ad-supported sites you enjoy reading, such as The Register.

If you have any recommendations, post away in the comments.