You can stuff your VoLTE and Notched iPhones – bargain-conscious Brits are shunning the big mobile operators for cheap-as-chips virtual network operators instead.

The virtual upstarts have not typically offered great deals on expensive flagships, or advanced network features. But they have outsmarted the big four. Which? magazine's annual consumer satisfaction survey placed MVNOs in the top five. Three of the big four (Vodafone, O2 and EE) took three of the four bottom rankings. Vodafone again scored lowest, for the seventh year running. 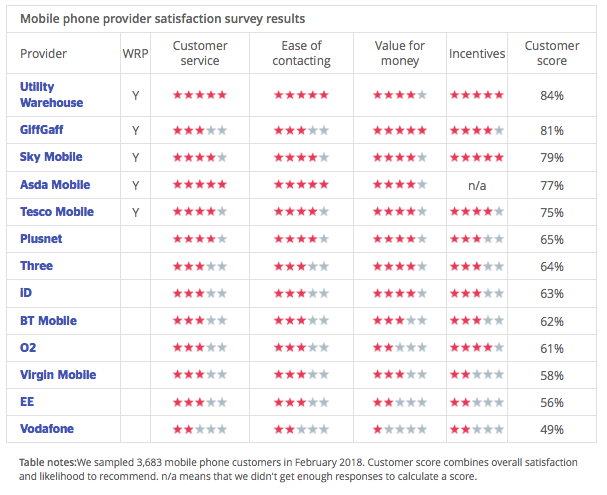 Of the big four, punters were happiest with Hutchison's Three, although consumer comparison site Which? added that "31 per cent of Three customers that we surveyed said that they experienced very poor signal, and a third of whose who had left Three in the past two years told us that it was because they were seeking better network coverage from another provider."

Typically it's billing that landed the incumbents in the merde. Take Vodafone, a perpetual wooden spoon-winner in the satisfaction surveys. Ofcom fined Vodafone a record £4.6m for misselling and inaccurate billing in 2016, and being unable to handle complaints well. But it has improved its network performance considerably.

The consumer poll isn't an outlier - in 2017 Vodafone's complaint resolution was rated considerably worse than anyone else's – by some distance. See page 82 of Ofcom's 2017 survey here (PDF), which went into mobile gripes in great detail.

TalkTalk, which wants to withdraw from the mobile market, did not feature in the survey. ®