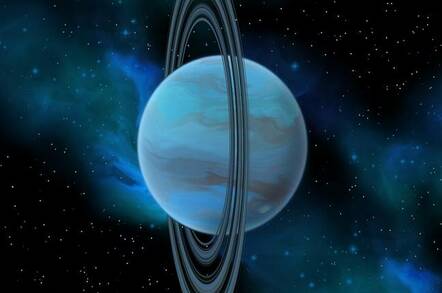 Scientists have solved a pressing mystery about our Solar System. Does Uranus smell like farts? Yes, yes it does.

A paper published on Monday in Nature confirms that Uranus contains clouds of hydrogen sulfide, a gas that smells like rotten eggs.

"If an unfortunate human were ever to descend through Uranus' clouds, they would be met with very unpleasant and odiferous conditions," said Patrick Irwin, first author of the study and a physics professor at the University of Oxford.

But due to the lack of oxygen and deathly cold temperatures, the smell isn’t the worst problem for visitors."Suffocation and exposure in the negative 200 degrees Celsius atmosphere made of mostly hydrogen, helium, and methane would take its toll long before the smell," he added.

NASA’s Voyager 2 spacecraft paid a short visit to the planet in 1986, but did not manage to observe its atmosphere in detail.

Scientists assumed that it was made up of other molecules ammonia or hydrogen sulfide ice, but haven’t found clear evidence of its chemical composition until now. A team of researchers analysed infrared light emitted from Uranus using the Gemini North telescope in Maunakea, Hawaii.

The Near-Infrared Integral Field Spectrometer (NIFS) on Gemini filters the sunlight reflected above the clouds in Uranus’ atmosphere into spectral lines that describe what the gas molecules are made of.

The signal from the spectral lines was very faint. “Only a tiny amount remains above the clouds as a saturated vapour," said Leigh Fletcher, co-author of the paper and a senior research fellow at the University of Leicester. "And this is why it is so challenging to capture the signatures of ammonia and hydrogen sulfide above cloud decks of Uranus.

The discovery marks another distinction between the ice giants - Uranus and Neptune - and the gas giants - Jupiter and Saturn. Neptune is also presumed to contain hydrogen sulfide gas, whilst the gas giants have ammonia and ammonia ice in its upper clouds.

Fletcher said it shows the different conditions under which both types of planets formed. "During our Solar System's formation the balance between nitrogen and sulphur (and hence ammonia and Uranus's newly-detected hydrogen sulfide) was determined by the temperature and location of planet's formation," he explained.

Figuring out the chemical makeup of Uranus is key to understanding how the structure of the Solar System. It is believed that the gas giants and ice giants formed in different positions and migrated from their original places from gravitational interactions with one another. ®

No way to sugarcoat this: I'm afraid Uranus opens and closes to accept particle streams

It's official. Uranus clenches after taking in hot beams

Moon blocks Uranus for stargazers Down Under

How to watch the lunar Moonie online