Oi, remember who you picked as our one-and-only engine supplier? 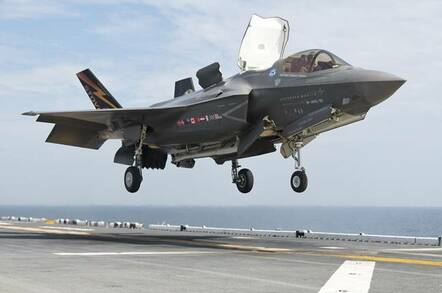 An F-35B on vertical landing flight tests. Engines for British jets will be overhauled in Turkey, by decree of the US government

US government official Aaron Wess Mitchell threatened action if the Middle Eastern/ European nation completed its purchase of Russian S-400 anti-aircraft defence systems, according to Flight Global, which reported the assistant secretary of state for European and Eurasian affairs as saying during a US Congress session:

Ankara claims to have agreed to purchase the Russian S-400 missile system, which could potentially lead to sanctions under section 231 [of the Countering America's Adversaries Through Sanctions Act] and adversely impact Turkey's participation in the F-35 programme.

This is because Turkey is an F-35 customer. Testing F-35s against a Russian-made air defence system inevitably raises fears that vital information on neutralising the F-35 threat would then be handed to the Russians on a plate.

The situation is a sticky one. Turkey is a vital NATO ally: it has the ability to bottle up Russia's southern naval fleet in the event of WWIII breaking out by closing the Bosphorus, the strait between Europe and the Middle East.

Recognising its position, Turkey has received great quantities of mostly American largesse, mainly consisting of top-end military technology, through the simple method of batting its eyelashes at Russia while pointedly glancing back at the US. The country builds components for the F-35 fighter jet and also, critically, is the American-designated engine overhaul plant for European F-35 customers.

That means any US efforts to put sanctions on Turkey would have a big impact on Britain's F-35s, which will be the only fast jets capable of flying from our Queen Elizabeth-class aircraft carriers. Though it is quite unlikely that the US will actually put sanctions on Turkey (something that would almost certainly push Turkey, and all its sensitive American tech, even closer to Russia), such a move would, in the medium term, leave increasing numbers of vital British-owned fighters grounded.

While one trusts that the Ministry of Defence has thought of this and has plans to keep a suitable stockpile of engines handy along with a pre-written begging letter to the US to a) drop the sanctions and b) flog us new engines direct from their factories, it is not exactly inspiring to hear an American minister casually threatening to throw his country's allies and customers overboard, apparently having not realised the wider impact of his threat.

The Netherlands, Italy, Denmark and Norway are the other European countries buying the F-35, and would be similarly affected.

Happily, we can (probably) conclude for now that the US isn't going to slap sanctions on Turkey. Not only would that cause an almighty logistical headache for half a dozen American allies, but it would also result in the very thing the US is keen to prevent.

When you rattle your sabre, you should be careful you don't accidentally whack your mates with it. ®

At Christmas, do you give peas a chance? Go cold turkey? What is the perfect festive feast?

True meaning of the season is all about how you overindulge

Yes, British F-35 engines must be sent to Turkey for overhaul

Also, the US negotiates fighter jet purchase contracts on our behalf

Did hacktivists really just expose half of Turkey's entire population to ID theft?