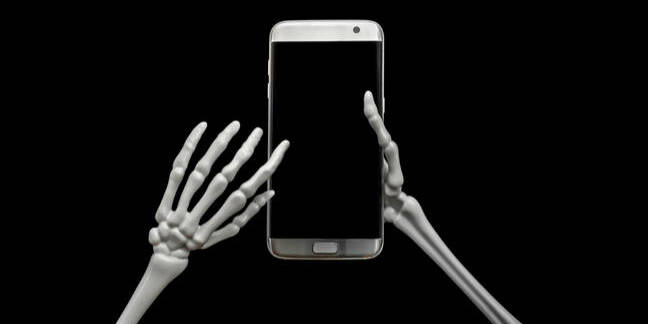 Detectives from Largo, Florida, visited a funeral home in nearby Clearwater and tried, unsuccessfully, to unlock a phone with the hand of its deceased owner to aid an investigation.

Thirty-year-old Linus Phillip was shot and killed by a Largo police officer in March. His fiancée, Victoria Armstrong, was at the funeral home when two detectives arrived with Phillip's phone. They then attempted to unlock it by holding the body's hands up to the fingerprint sensor.

While Armstrong told the Tampa Bay Times she felt "disrespected and violated" by the ghoulish activities, Lt. Randall Chaney of the Largo Police Department explained that the two officers didn't think a warrant was required because there is no expectation of privacy after death.

There is no clear indication of the phone manufacturer, although, for an iPhone at least, there is only a short window available to law enforcement agencies to unlock a device with a fingerprint before the passcode is needed.

Apple states that if more than 48 hours have passed since the last unlock, an iPhone will prompt for a passcode. Equally pressing would be the need to keep the thing charged.

Officers also only have five attempts to get the correct corpse digit onto the touch sensor before, again, an iPhone will lock itself.

Whether the finger of a dead person could unlock a smartphone is debatable. Certainly, a simple optical sensor can be fooled with little more than a high-resolution image or 3D print of a fingerprint.

However, with scanners such as that built into iDevices checking for "liveness" using a Radio Frequency (RF) capacitive sensor, things get a bit more complicated.

It was, however, reported last month that cops may have got around this challenge even if the Largo team were unsuccessful.

After horrifying visions of undead severed fingers being attached to electrodes and pressed against sensors, a smartphone user might be forgiven for switching to the magical Face ID offered by the iPhone X.

But with scientists able to make the muscles of cadavers perform all kinds of antics, including blinking, bypassing the liveness checks of Face ID without requiring a creepy mask should not be beyond determined members of the authorities. ®

Choose your own thrill ride: A Florida slidewire or catching a rocket by helicopter

Florida man won't be compelled to reveal iPhone passcode, yet

The state's top court, however, may be asked to intervene

Plus: Another mayor defecates on floor at swearing-in ceremony, leaves