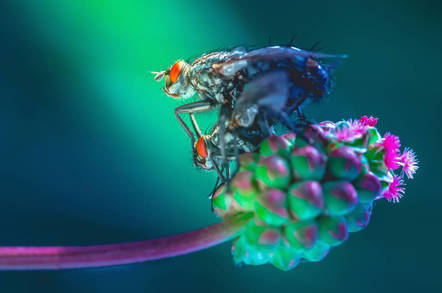 A new study reveals that male fruit flies enjoy the sensation of ejaculation, and are more likely to turn to alcohol when sexually frustrated. Sound familiar?

The research published in Current Biology on Thursday is, apparently, the first to prove the rewarding nature of orgasms among insects and mammals.

“Successful mating is naturally rewarding to male flies and increases the levels of a small peptide in the brain called Neuropeptide F. Male flies that are sexually deprived have increased motivation to consume alcohol as an alternative reward," Galit Shohat-Ophir, co-author of the paper and a researcher at Bar-Ilan University in Israel, said (presumably with a straight face).

The team used optogenetic tools, a technique that activates particular neurons that have been genetically modified to respond to light. They shone a red light onto neurons expressing corazonin, a neuropeptide often found in insects.

Neuropeptides are short strings of amino acids used by neurons to communicate with one another. And the corazonin neurons located in the fruit fly’s abdomen have been known to spark an eruption of semen and sperm.

Flies WANT beer booze and now we know why - yeast

They trapped fruit flies (Drosophilia) in a rectangular enclosure, where one side was bathed in red light and monitored where the male flies preferred to spend their time. The results showed that most chose to loiter near the red light, a sign that the critters also liked to ejaculate.

To verify their results, the researchers trained the flies to connect the red light and ejaculation with a particular smell. Again, they found that they liked to hang around the scent that reminded them of orgasms.

After having their corazonin neurons repeatedly activated, the researchers found elevated levels of neuropeptide F floating in their brains. The biological process resembles what happens when males have actually shagged with females.

The next step of the experiment involves giving the males a choice of normal liquid food, or food spiked with alcohol. The ones with more neuropeptide F preferred non-alcoholic food, but the poor control flies starved of the red light made a beeline for the boozy concoction.

It’s all down to sexual frustration. “Sexual interactions with female flies that do not reach copulation are not sufficient to reduce ethanol consumption, suggesting that only successful mating encounters are rewarding,” the paper said.

Shohat-Ophir said the behaviour can be explained by evolution. "The principles by which the brain processes reward are extremely conserved in all animals; this is a really basic every day machinery that helps animals survive.”

The researchers hope that this humorous experiment will help scientists unlock the nature of drug addiction.

"Our studies suggest that the state of the animal (i.e., undergoing successful mating or being rejected) affects the motivation to consume drug rewards. An analogy for reward states can be proposed in which a high-reward state is illustrated by a full 'reservoir' and low state by an empty 'reservoir.' One can speculate that vulnerability to addiction is related to the size of the 'reservoir' that needs to be filled, or to different sensitivity to changes in the reward levels," she concluded. ®