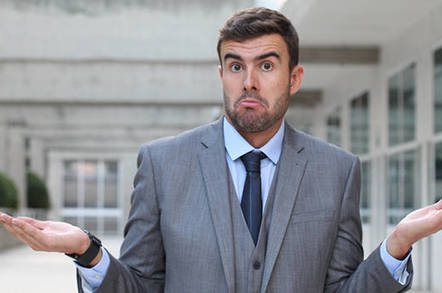 The social network is keen to promote the changes as evidence it is listening to concerns – from users and lawmakers – about how it gathers and sells private information, and argues that the new GDPR law "was an opportunity to invest even more heavily in privacy."

Which all sounds terrific until you actually look at what it has done and – hold on to your hats – it's the same old bullshit.

To be clear, Facebook's entire business model is built on gathering as much information as possible on you and then figuring out how to use that information to make as much money as possible. That has led to a series of highly dubious decisions from which it seemingly continues to learn nothing.

It is the same game over and over again: Facebook gives people the appearance of choice and then carefully directs users to making the right ones. The Silicon Valley biz is a billion-dollar illusionist. Pick a card, any card, but you always end up with the one they want you to have.

Nothing out of bounds

Here's what Facebook doesn't do: it doesn't make information – any information – out of bounds. It will take whatever you give it, and if you don't specifically stop it, it will sell that information in any way it can.

A good example is the fact that Facebook decided to allow advertisers to access your private messages. That's right, it introduced an API to let anyone read your personal messages. All it had to do was get you to agree. And several companies have already testified about how ridiculously easy it was to get people to simply tap a button.

Why would any company imagine that giving commercial entities access to their users' private messages was acceptable?

Sometimes Facebook "rolls out a new feature" – like face-recognition – and turns it on automatically, leaving it up to you to figure out how to turn it off. Since it gives you the "option" of turning it off as far as Facebook is concerned, all is fine and dandy. (It is currently being sued over that one.)

This time, however, it is different. Following the Cambridge Analytica scandal where it was revealed the dubious analytics company managed to suck in the details of over 87 million people by getting just some of them to play a silly personality game, Facebook can no longer claim that it isn't fully aware of how outraged users and lawmakers are that it plays so loose and fast with people's private data.

CEO Mark Zuckerberg was forced to endure two days of Congressional hearings and the kind of media attention that hardly any company ever has to deal with. Facebook knows exactly what the concerns are.

Which is why its response right now – sparked by GDPR – is the clearest possible sign of who Facebook really is.

And the answer, you will be amazed to hear, is an intentionally manipulative, arrogant, self-serving business that has no intention of taking its users' privacy seriously when it can make money from their personal information.

Even after everything that has happened in the past few weeks, Facebook has not changed one iota. Its new privacy settings are a disgrace.

So what has it done this time?

Most broadly, Facebook has gone to great lengths to get you to simply agree to share all your information. This is most apparent in the persistent appearance of friendly blue buttons: "Accept and Continue"; "Continue"; "Save."

What those buttons should say is: "Provide your private information"; "Let others target you with ads"; and "Sucker."

You can, of course, go through all the settings and actually prevent – at least in theory – Facebook from sharing information like your political and religious beliefs, sexual orientation and relationship status.

You could stop it from tracking you wherever you go. You could prevent it from automatically identifying and tagging you in pictures that anyone else takes and uploads. You should be able to stop it from bugging you and listening in 24/7 to what you say in order to find some kind of match between what you say in private and any one of thousands of companies willing to pay to have their ad appear on your phone.

Or you could, you know, hit the grey button that says "Manage Settings" and walk through every damn setting that Facebook has decided needs to exist, complete with an argument on every page as to why it's a good idea to let Facebook have their information.

Here is just one example: the pages for providing access to your sexual preferences, religious beliefs and political views. The first page has a long explanation about what this is about. It begins:

"If you add specially protected data, we’ll share it with those you choose."