Hello DARKNESS, my old friend. I've come to talk with you again... about a 10,000-pixel alien-hunting camera

A vision softly creeping... of an exoplanet or two 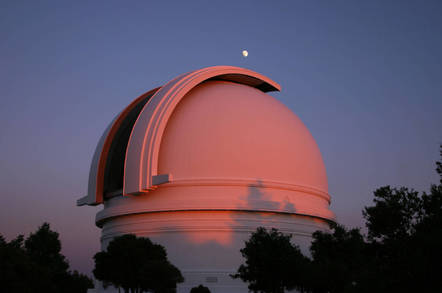 A picture of the Hale Telescope. Image credit: Palomar/Caltech

Astronomers are building the world’s largest and most advanced superconducting camera – with the goal of snapping clearer shots of exoplanets for scientists hunting alien life.

Thousands of exoplanets have been detected by telescopes in space. Instruments on probes look for the characteristic dip in light emitted from stars when a planet crosses the star during its orbit. This simple change indicates the possible presence of an orbiting alien world.

But imaging these mysterious and very faraway planets, to get a somewhat better idea what they actually look like, is a much more difficult task: an individual planet can be hard to pick out against its brighter sun, and there are also all sorts of noises and specks to filter out.

A large team of astronomers in the US hopes to overcome those challenges, though, with a device dubbed DARKNESS. It stands for the Dark-speckle Near-infrared Energy-resolved Superconducting Spectrophotometer – and it is a 10,000-pixel integral field spectrograph stationed here on Earth.

"Taking a picture of an exoplanet is extremely challenging because the star is much brighter than the planet, and the planet is very close to the star," said Benjamin Mazin, who leads the $811,000 project and is a physics professor at the University of California, Santa Barbara, explained earlier this week.

DARKNESS uses an array of optical and near-infrared microwave kinetic inductance detectors (MKIDs) to improve the contrast in snaps of the heavens. These detectors contain superconducting film, and can measure the arrival time, wavelength, and position of absorbed photons, in order to help scientists set apart faint alien worlds and mere speckles of light.

The implementation details are set out in a paper [PDF] that appeared in the Publications of the Astronomical Society of the Pacific journal on Monday.

"This technology will lower the contrast floor so that we can detect fainter planets," Mazin said.

"We hope to approach the photon noise limit, which will give us contrast ratios close to 10-8, allowing us to see planets 100 million times fainter than the star. At those contrast levels, we can see some planets in reflected light, which opens up a whole new domain of planets to explore."

To reduce noise in the MKIDs as much as possible, DARKNESS contains a cryostat freezer unit capable of maintaining temperatures below about -273.05°C or 100 milliKelvin. DARKNESS is being put through its paces in the 200-inch Hale telescope at the Palomar Observatory, near San Diego in California. So far, there have been four test runs. The researchers will run more experiments, and calibrate it by focusing on certain planets.

In the future, they hope it will be adapted for the much larger Thirty Metre Telescope, which is expected to be built in Mauna Kea, a dormant volcano on the island of Hawaii.

"With that, we'll be able to take pictures of planets in the habitable zones of nearby low mass stars and look for life in their atmospheres. That's the long-term goal and this is an important step toward that," Mazin said. ®