God, what kind of digital business are they running? 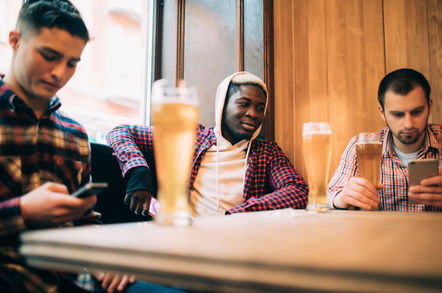 There's only one reason to head to cheap 'n' cheerful UK pub chain Wetherspoons and it is about to be taken away. No, we're not talking about the cheap beer, ever-shrinking menu options, or politically nuanced beer mats.

As any 'Spoons aficionado will testify, the main reason to patronise this most functional of drinking houses is for its awesome social media presence.

So it was with a heavy heart that the outspoken founder Tim Martin told his legions of fans this morning that the chain is shutting its Twitter, Instagram and Facebook accounts for all 900 pubs – as well as its head office – with immediate effect. And then he did that thing: actually shut down the Twitter account.

In what could in no way be perceived as a publicity stunt, he said: "It’s becoming increasingly obvious that people spend too much time on Twitter, Instagram and Facebook, and struggle to control the compulsion.

"We will still be as vocal as ever through our Wetherspoon News magazine, as well as keeping the press updated at all times.

"We will also be maintaining our website and the Wetherspoon app and encourage customers to get in touch with us via our website or by speaking with the manager at their local pub."

Martin said he did not believe that closing those accounts would affect its business whatsoever "and this is the overwhelming view of our pub managers."

On the other hand, self-generating a non-story for every national paper to swallow can't harm the company either...

Wetherspoons has more than 44,000 Twitter followers and more than 100,000 followers on Facebook – which is not many considering how many of us have been known to flock through its doors (especially in that lean week before payday).

Of course, there's nothing to stop punters posting solitary selfies on Instagram of themselves downing cheap pints, while indulging in Thursday Curry Club, to the background noise of everyone else doing exactly same. ®