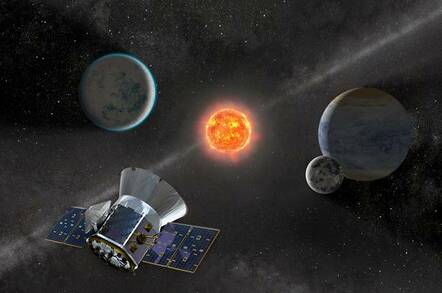 Planet hunters will be keeping their fingers crossed this evening as SpaceX flings NASA’s 350kg Transiting Exoplanet Survey Satellite (TESS) into a highly elliptical orbit around the Earth.

SpaceX, which was awarded "Category 2" certification for the "Full Thrust" Falcon 9 by NASA in January (PDF) despite a notable boom on the way to the International Space Station (ISS) in 2015, has to hit a 30-second launch window, which opens at 22:32 UTC tonight from Space Launch Complex 40 at Cape Canaveral.

NASA's "Category 2" certification (PDF) means the agency is willing to use the launcher for medium risk missions with lifespans of up to five years (Class B (PDF), in NASA lingo.)

Eight minutes after launch, SpaceX hopes to repeat the crowd-pleasing stunt of landing the first stage on the drone-ship Of Course I Still Love You, which will be stationed in the Atlantic. The booster could then be reused in a future mission.

There are no plans to attempt a payload fairing recovery this time around.

With NASA’s current planet hunting observatory, Kepler, running on fumes, boffins need to get TESS into orbit to continue the flow of data and, hopefully, discoveries.

TESS was originally conceived in 2006 as a private mission funded by, amongst others, Google and MIT. It was subsequently taken on by NASA as an Explorer Class (EX) Mission, with Orbital ATK awarded the contract to actually put the thing together in 2013.

During its two-year mission TESS will monitor the brightness of more than 200,000 stars, looking for the tell-tale drop in brightness caused by planetary transits (when an orbiting planet passes in front of the star).

Scientists expect TESS to catalogue some 20,000 transiting exoplanet candidates (most of which will be larger than Neptune), as well as 50 Earth-sized bodies.

If all goes to plan, TESS will provide a range of targets for the James Webb Space Telescope (JWST) to point at. Although at the rate things are going, the TESS mission could well have finished before JWST even makes it to the launchpad. ®

SpaceX has now put the launch off until Wednesday, citing the need for further checks on the guidance, navigation and control systems.