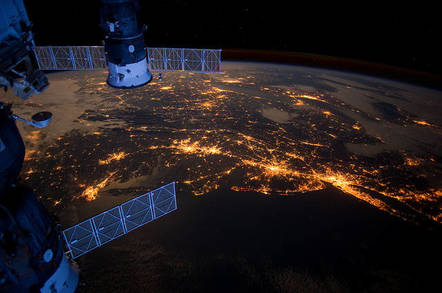 The Federal Communications Commission on Friday issued an enforcement advisory [PDF] warning organizations it will take action against anyone who tries to offer a satellite-based internet service without first getting its permission to operate.

"Satellite operations, including the launch activities necessary to establish a satellite in orbit, are complex technical undertakings in which multiple parties may play a role," the regulator blasted.

The watchdog said companies that defy its authority to clear launches face the "full range of FCC actions" up to and including being sued into oblivion.

The commission's notice doesn't name any names, but it's not hard not to conclude that the warning wasn't at least partially aimed at Swarm, the cheeky Silicon Valley startup that last month defied FCC orders not to launch four small satellites over fears the tiny spacecraft would pose a collision threat to other orbiters.

Swarm, which seeks to create an orbital network of satellites to provide communications amongst Earthbound IoT devices, had tried to obtain a license from the FCC, but was denied permission after the Commission concluded its tiny satellites were too small to be reliably picked up by tracking systems and could be a safety risk. The company opted to go ahead anyway, slipping its cubesats aboard an Indian Polar Satellite Launch Vehicle and prompting the FCC to cancel any further launches.

The FCC notes that regardless of where it is launched, any satellite that wants to communicate with a base station in the US needs its clearance to operate, and even those that talk to foreign stations may still need clearance from the United States.

"A number of countries also require that International Telecommunications Union coordination and/or notification procedures have begun or have been completed before issuing an earth station authorization."

The commission also issued a warning to any space companies tempted to allow Swarm, or any other rogue satellite operator, passage on one of their rockets.

"Launch service providers should be aware that a satellite integrated into a launch vehicle or deployment device without a current FCC authorization may need to be removed from that vehicle or deployment device if the satellite operator’s application for an FCC authorization is not acted upon favorably, or for various reasons cannot be granted within a time frame consistent with the launch schedule," the FCC said.

"Removal of an unauthorized satellite or its deployment device from a launch vehicle may cause disruptions to launch operations and has the potential to impact other packages on the launch vehicle, whether primary or secondary." ®

Also: Repeated reboots to get a Windows 10 update installed? Just like the (not so) old days