Anyone can lob a car into space, but you need a Boeing rocket to bring it back 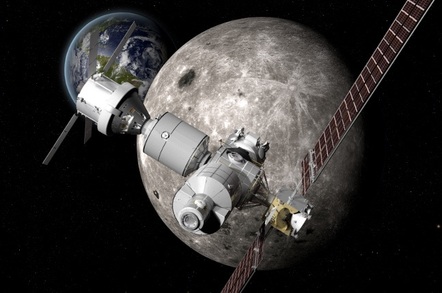 After commending the innovation of the new-space community, while pointing out that Boeing had had its claws into the space industry since the dawn of spaceflight, Muilenburg was keen to emphasise the reliability and safety of Boeing’s wares, particularly when making the jump from transporting cargo into space to lobbing humans into orbit.

Allbritton asked: “So the Camaro is not going into space any time soon?”

Muilenburg joked in reply: “We might pick up the one that's out there [Musk's Tesla Roadster and its dummy driver, Starman] and bring it back: ‘Look what we found!’”

The Musk-baiting continued with the Boeing boss plugging NASA’s troubled Space Launch System (SLS), claiming that it is the “only rocket being built that has the capacity to go back to the Moon and then go to Mars”.

Muilenburg insisted that the first launch of SLS would happen next year, although he added that the key thing was consistent reliable funding over many years.

Observers of the US space programme might add that consistency in direction would also be a plus: NASA has been directed to go to the Moon, then Mars, then an asteroid and finally back to the Moon again over a succession of US administrations.

The two companies are locked in competition for lucrative launch contracts, with the recent successes of SpaceX putting elder statesman Boeing under pressure.

As for when humans might reach Mars, the Boeing CEO remained optimistic, while getting in one final SpaceX dig:

“I certainly anticipate that we're going to put this first person on Mars during my lifetime and I'm hopeful that we'll do it in the next decade, and I'm convinced that the first person who gets to Mars is going to get there on a Boeing rocket.”

Muilenburg has said such things before, receiving an encouraging, if terse, two-word response from SpaceX supremo, Elon Musk:

Unable to resist mentioning Boeing’s core aviation business, Muilenburg ended by dangling the carrot of hypersonic travel. Allbritton took the bait, and asked if Boeing’s cancelled Sonic Cruiser might be making a comeback.

“Something better,” teased the Boeing boss, promising point-to-point connectivity anywhere on Earth in a matter of hours. With the recent investment in Reaction Engines Limited, this may stand a chance of becoming a reality. ®