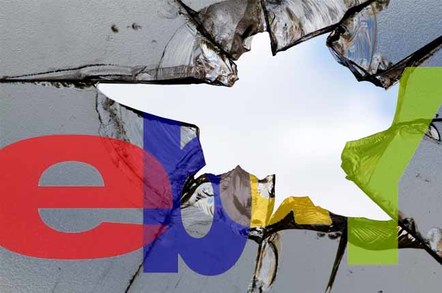 A businessman has accused online tat bazaar eBay of trapping him in a Catch-22 style data retention loop after blocking him from deleting his company’s account on the site.

Richard Stebbings, owner of transit box biz Panzer Cases, told us eBay was refusing to delete his account by implementing odd rules – which may put it into conflict with the EU’s forthcoming General Data Protection Regulation.

Earlier this year Panzer Cases’ seller rating fell below the auction site’s quality threshold and was 'frozen' (as distinct from a ban), which Stebbings blamed on automated auction software causing problems. Five customer purchases were cancelled after what he described as the software generating listings for items that were out of stock. He said that all the affected customers were contacted and refunded.

“Before Christmas we installed a new piece of 3rd party software to help manage our online shop,” Stebbings told The Register. “This software turned out to be rubbish and the result of this was that our seller performance level on eBay dropped below the minimum threshold. Despite the fact we were resolving the issue the account was suspended indefinitely on 25th February and all selling privileges were removed forever. There is no route to appeal. It’s just a flat no.”

eBay told The Reg that the cancelled transactions had broken its rules and triggered the site’s fraud protection measures. 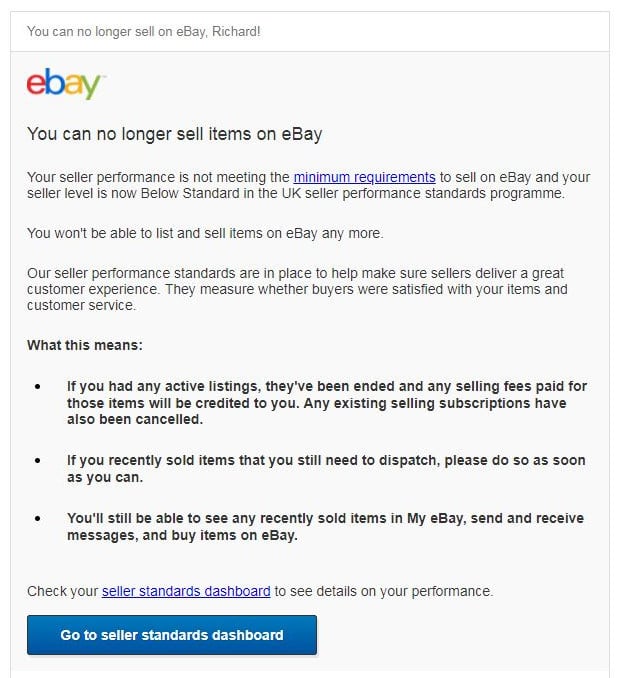 eBay followed up on Stebbings' protestations with an email, seen by us, stating: "We carefully reviewed your account and determined that it doesn't meet our minimum seller performance standards. For this reason, your account is permanently restricted from selling."

When he decided to give up and just delete the account, however, Stebbings discovered that eBay won’t let its users do what every other online business in the world does by offering a link marked "delete my account". Instead, eBay users must go to customer services on bended knee and beg for their accounts to be deleted, per the online souk’s small print. The key term in that says: “If your account is no longer meeting minimum standards, you can’t close it until your account is no longer below minimum standards.”

Stebbings pointed out that this puts him in a Catch-22 situation: “Now, because my seller account has been suspended indefinitely, there is absolutely no way I can raise my seller level. I can’t improve delivery time, dispatch time, collect customer feedback, all those things that would enable me to improve my seller performance level. The result is that I can never close my account.”

He also told El Reg that additionally his personal account had been frozen at the time the business account was locked up, seemingly because it shared a registered postal address with the latter.

We understand that eBay’s position is that because it had flagged the Panzer Cases account as fraudulent, the web souk does not want to re-enable its ability to make sales. Oddly, however, purchases can still be made through it, as eBay confirmed to The Register.

The EU's General Data Protection Regulation comes into force on 25 May and includes a right of erasure, meaning companies must delete data if they no longer have a reason for processing it and the data subject asks them to. In other words, businesses can keep hold of information if they can argue there is a legitimate reason to do so – for example, a bank might try to argue it can keep a log of missed credit card payments so as to calculate accurate credit scores.

While we do not know either way, eBay's forcible retention of data in this instance may be linked to its recently announced plan to let the taxman freely rifle through its databases. ®