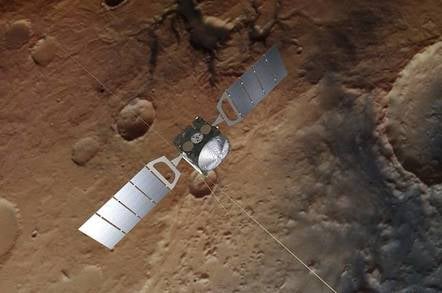 The European Space Agency's (ESA) Mars Express orbiter is getting a software refresh as a reward for 14 years spent circling the red planet.

Mars Express arrived in orbit at the end of 2003, and set about collecting high-resolution imagery of the surface, spotting water and detecting methane.

Not too shabby for a spacecraft only designed to last one Martian year (nearly two Earth years.)

However, the venerable orbiter's gyroscopes are slowly giving up. The gyros are critical devices since they, along with two star-trackers, allow Mars Express to keep its antennae pointed at Earth and its instruments trained on Mars.

In 2017, handlers realised that at the gyros' current rate of degradation the mission would end in the first half of 2019.

However, engineers at both ESA and NASA have experience of gyro-less operations. For example, ESA's Rosetta probe ran without gyros for a period and NASA devised gyro-less operations (PDF) for the Far Ultraviolet Spectroscopic Explorer (FUSE) when gyros on that spacecraft began to fail.

Engineers decided to follow the example of Rosetta and primarily use the spacecraft's star-trackers with the gyros activated only when necessary.

Unfortunately, this meant rewriting a large chunk of the elderly flight software for Mars Express. However, as operations engineer Simon Wood observed: "We were also helped by being able to take code flown on Rosetta and transplant it into the Mars Express guidance software."

That's right – even ESA programmers are not above the old standby of pinching someone else's code with judicious use of copy and paste.

The team had not attempted such a huge revision of the software but, faced with the mission's certain end, figured they might as well go for it.

The new code, developed over several months, was uploaded to some spare memory on the spacecraft on 8 April. Anyone wondering where their disk space has gone while Windows 10 silently downloads an update will be familiar with the process.

Managers at ESA gave the go-ahead to activate the new software on 10 April. To do that the engineers will turn off Mars Express on 16 April and then nervously wait for it to restart. Again, anyone who has installed a major Microsoft OS update will understand the feeling.

If successful, the new software should see the spacecraft lasting well into the 2020s. Long enough to welcome ESA's 2020 ExoMars mission. ®

We hardly noticed at first, but records revealed plenty about how star-stuff sails solar winds

Fly me to the Moon, let me play among the stars. Do you think we could get another probe to land on Mars?