They're also flogging them commercially 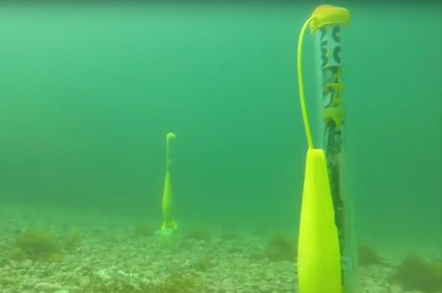 Aquabotix's Swarmdiver underwater drone. The torpedo-shaped craft can also sail itself around horizontally

An Australian company has developed a fleet of underwater drones capable of swarming the seas.

Aquabotix’s Swarmdiver drone can, according to the company, “function as a single coordinated swarm with one human operator,” diving below the sea’s surface “to collect valuable intelligence”.

The craft itself weighs 1.7kg, is 75cm long, can dive vertically down to 50m, and is said to be capable of sensing its depth to within 2cm. A “multi-constellation GPS” installation lets the Swarmdiver figure out where it is in the world, while a “wireless data feedback” system is installed on it so it can relay its gathered data home when it surfaces. In itself this is revealing: this underwater drone does not appear to be capable of loitering underwater and relaying real-time data.

This is an explicit pitch of underwater drone technology at the world’s navies. Much of this sort of work tends to stay under the radar (ho ho), as much because it is literally out of sight as well as being a sensitive area, security-wise.

Underwater naval operations are more or less exclusively focused on detecting submarines and gathering related environmental data to either find them or help them stay undetected. Information such as local salinity levels, temperature, water density, the thermocline level and other such environmental stats give vital information to submarine captains – and to the captains of warships hunting for submarines, as we reported last year.

Britain has been making some quiet, and not so quiet, advances of its own in underwater robotic tech; the Unmanned Warrior series of naval exercises tested, among other things, underwater “wave gliders”, which picked up and relayed underwater environmental data to remote processing stations. ®