Why did this show up before a Thomas The Tank Engine clip? 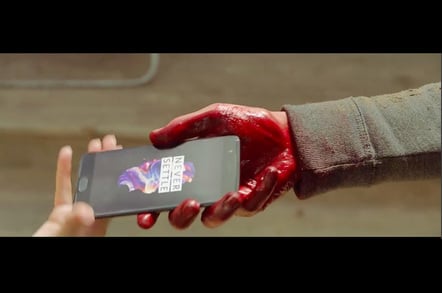 The UK advertising industry's watchdog has censured OnePlus over a horror spoof ad for its OnePlus 5 phone.

The amusing 30-second ad "Lake Blood" ends with a chainsaw-wielding hillbilly taking a selfie by a corpse he had just dismembered. It was shot by director Ben Gregor for production company Knucklehead. The Advertising Standards Agency received 28 complaints.

OnePlus argued that the ad was intended to make fun of selfie-obsessed teens and satirise the horror movie format, and was targeted at over-16s. But the ASA pointed out that it contained "unexpectedly shocking content in the final scene" and "an unanticipated amount of gore".

The gummy mouthed watchdog noted the ad hadn't actually been very well targeted at all – turning up in the video feed of a seven-year-old, with controls in place, and played immediately prior to a clip about Thomas The Tank Engine.

Therefore the ASA concluded it had not been appropriately targeted and breached the CAP Code on grounds of responsible advertising and causing harm and offence. If you are over 16 and not easily upset, you can see it here. OnePlus was told not to broadcast the ad again in its current form, and provide warnings if it does so again.

There's plenty of horror on YouTube already aimed at kids

This illustrates the dilemma advertisers find themselves in. Notably absent from the ruling is any censure for the video service which ran the ad in front of a seven-year-old, which is not named by the ASA, but we may guess rhymes with "LooLube". Last November, Google's video service for children was found to contain clips of abuse, violence and torture targeted at children. Some of this was generated by creepy content factories and attracted tens of millions of clicks.

Our report prompted this reply from a reader in the comments, which shows the dilemma parents have in grappling with YouTube's parental controls – or lack thereof. ®