AWS Summit SF: Most definitely not a sales event, nuh uh, no way 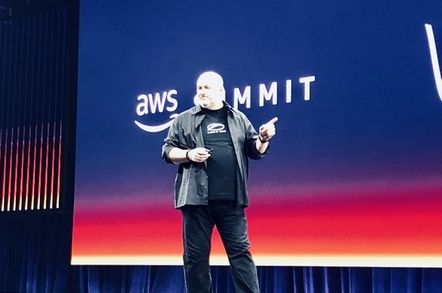 The 2018 AWS Summit in San Francisco began on Wednesday with shock and awe, a chest-thumping bass beat accompanying a fusillade of testimonials from business customers that have cozied up to Amazon's cloud infrastructure.

Amazon CTO Werner Vogels, introduced by text-to-almost-human-speech service AWS Polly, then emerged to insist, without a hint of irony, "This is not a sales event."

He described the gathering as a technical talk, one intended to provide education.

"With all the different services we offer, education becomes a more important part of our business," he said.

Good luck sorting the AWS sales pitch from the cloud evangelism, the technical exegesis, and the the customer celebration.

Shutterfly is in the process of migrating its core production applications and its 75-petabyte image library to AWS.

In his denial of commercial purpose, Vogels made a fair point about the need for education. With more than 125 distinct services, AWS demands study to fully understand; it's not something one picks up during a lunch break.

During this event, that we're told had nothing to do with marketing or sales, Vogels nonetheless took a moment to mention AWS' $20bn plus annual run rate and 45 per cent year-on-year growth.

And he pointed to a slide showing the competing cloud computing companies that aspire to catch AWS, labelled vendor two, vendor three and vendor four.

With AWS playing the uncredited role of vendor one, vendor two stands for Microsoft Azure and vendor three, written in a familiar red, green blue, and yellow color scheme, could only be Google. Vendor four, we're guessing, represents IBM. But really, once you get that far back in the pack, it could just as easily be Oracle.

The slide showed a vertical bar graph and compared to AWS, as might be anticipated, the other three came up short.

Later on, Vogels also took a subdued shot at Oracle, while declaring that AWS' Aurora database is the fastest growing service in the cloud company's history. Customers, he said, are sick and tired of licensing the schemes that enterprise vendors put them through.

Oracle's Larry Ellison has been more direct in his AWS broadsides.

What's new, and what isn't

With so many cloud services, improvements could be expected and AWS did not disappoint.

And AWS Sagemaker, the cloud biz's AI platform for running machine learning frameworks, gained support for new types of instances, for testing on local devices, and for Tensorflow 1.6.0 and Apache MXNet 1.1.0.

Matt Wood, general manager of artificial intelligence for Amazon Web Services, took a turn on stage, talking up business demand for machine learning. Tens of thousands of customers are running machine learning through AWS, he said.

Nothing says "your call is very important to us" quite like software.

He also took a moment to note that it's never been easier or more cost effective to collect data, a sentiment that given recent missteps by Facebook, might have been better framed with more caveats.

After declaring, "I strongly believe that today security is everybody's job," Vogels announced the debut of Amazon Secrets Manager, a service for storing developer-oriented secrets – API keys, passwords, tokens, and the like.

"I'm really passionate about this because it allows us to build systems that are way more secure than they were in the past," said Vogels.

In addition, he announced the arrival of AWS Firewall Manager, a way to centrally configure AWS Web Application Firewall rules across multiple accounts, and AWS Certificate Manager – Private Certificate Authority, for certs used only within an organization.

"There no reason to not use certificates and encryption that this moment, so please do so," said Vogels.

At the conclusion of the two-hour teach-in, Vogels closed by saying, "With that, go build."

And while you're at it, get billed. ®