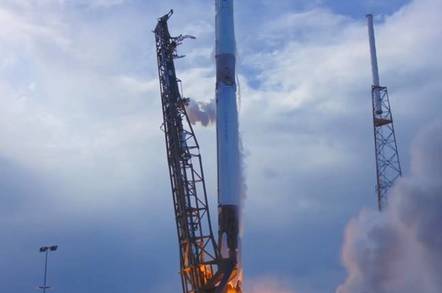 Lift off ... Elon's Musketeers put another rocket and payload into orbit

NASA will study the feasibility of human reproduction in space, it announced on Monday.

We know what you’re thinking. And no, it doesn’t involve astronauts having cosmic-nookie in zero-g conditions. NASA doesn’t appear to have an official policy about getting it on in the heavens; it’s not strictly forbidden, but there have been no confirmed cases low-Earth ejaculation so far.

Instead, the American space agency has sent frozen samples of human and bull sperm to the International Space Station in a scientific study codenamed Micro-11. It’s just one of the few goodies carried by Elon-Musk-run SpaceX’s Falcon 9 rockets in its fourteenth resupply mission to the orbiting lab. The rockets and payload blasted off on Monday from Cape Canaveral, Florida, USA.

The project, led by NASA’s Ames Research Center in Silicon Valley, aims to study how weightlessness affects a sperm’s ability to fuse with an egg. The astronauts aboard the ISS will be expected to defrost the sperm and record videos of the baby-making juice to analyze its motion in space.

Next, preservatives will be added to the samples and sent back to Earth where they will be studied to see if the biological processes needed for fertilization occurred, and they will also be compared to sperm activated on Earth.

Fertilisation is a complex process. In mammals, it involves the release of semen which carries several million sperm cells. These cells have to be activated before they can start swimming towards the egg.

The astronauts will do this by adding a chemical mixture to the thawed samples. Once they reach their destination, the sperm’s head attaches itself to the egg and unleashes a series of enzymes that can break through the egg’s membrane to fuse with it.

It’s not the first time the little wrigglers have been sent into space. Bull sperm was booted up in 1988 on a European Space Agency rocket, and NASA has experimented with sea urchin sperm before. Previous studies showed that the lack of gravity in space activated the sperm more quickly, but it took much longer for them to start fusing with the egg.

Bull sperm moves similarly to human sperm, apparently. So the bovine samples will be used for quality control and will be compared with the human sperm, where NASA scientists will look for any slight differences between both substances.

“We don’t know yet how long-duration spaceflight affects human reproductive health, and this investigation would be the first step in understanding the potential viability of reproduction in reduced-gravity conditions,” the space agency said in a statement.

There are promising signs that space sperm can lead to reproduction. Last year, researchers at the University of Yamanashi, Japan published results that showed healthy pups were born after injecting female mice with frozen samples that had left the gravity well.

Some other interesting tidbits on today's SpaceX delivery spacecraft include: a Human Research Facility Centrifuge, a fancy machine being used to spin test tubes of blood; fruit fly larva infected with a parasite passed onto them by parasitic wasps; a plant known as purple false brome or Brachypodium distachyon; the Passive Orbital Nutrient Delivery System, a system that includes space for a plant to grow as well as a reservoir for water and nutrients; and apparatus to study X-ray and protein crystallography.

The resupply mission with its sticky contents will be berthing at the ISS on Wednesday. ®