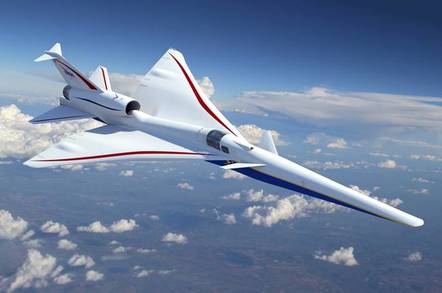 Why the long face ... Illustration of Lockheed Martin's X-plane design

Vid Supersonic air travel over land has been stymied since the 1960s due to the rather annoying sonic booms generated by speedy airplanes.

Now, NASA, having given it some thought, has ordered a new airframe that could reduce the noise levels down to those of standard street traffic. If successful, Uncle Sam's boffins want to expand the design into a supersonic, super-quiet passenger jet.

In the early days of supersonic travel, the Anglo-French Concorde was limited to only reaching top speed when clear of land due to the sheer noise of the thing. That, and the relative inefficiency of the 1960s aircraft design among other things, severely hampered its utility. It was retired in 2003.

Well, forget Concorde. Lockheed Martin's Skunk Works, makers of the iconic SR-71 Blackbird, was today awarded a $247.5m contract by NASA to build a potential successor: the Quiet Supersonic Technology (QueSST) X-plane by 2022. The 94ft-long airframe has a wingspan of 29.5ft and is designed to fly at Mach 1.4, or 940 mph, at an altitude of 55,000 feet.

Here's a video from Lockheed detailing the project:

"It is super exciting to be back designing and flying X-planes at this scale," said Jaiwon Shin, NASA's associate administrator for aeronautics. "Our long tradition of solving the technical barriers of supersonic flight to benefit everyone continues."

The QueSST will use an innovative body design to minimize the sonic boom created by flying faster than the speed of sound. Canards on the front of the aircraft and lifting surfaces built into the tail are designed to dissipate shock waves, working with an unusually long nose assembly.

“You try to minimize the strength of the shock, so you have a very sharp nose on the aircraft, but you have to extend it a long way past the fuselage,” said Thomas Corke, professor of engineering at the University of Notre Dame.

“The idea is that there is no way to avoid a shock wave supersonically. The design doesn’t eliminate shock, it just minimizes it, so what’s perceived on the ground is almost imperceptible.”

The end result should be to avoid the sharp double bang of a traditional sonic boom, which can damage eardrums and even buildings, and replace it with what NASA calls a "soft thump" that would barely register above the noise levels generated by passing cars.

"We look forward to applying the extensive work completed under QueSST to the design, build and flight test of the X-plane, providing NASA with a demonstrator to make supersonic commercial travel possible for passengers around the globe."

Once the aircraft is built, NASA test pilots will fly it at altitude across sections of the US and see what kind of disturbance it causes people on the ground. If the design is goer, the agency wants to design a passenger aircraft that could revitalize the demand for supersonic travel. ®