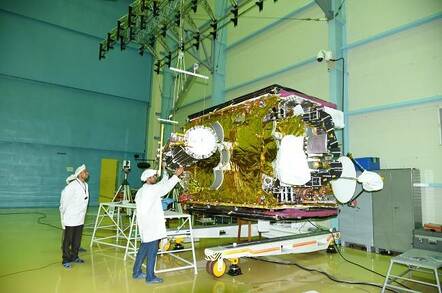 The India Space Research Organisation (ISRO) has lost contact with GSAT-6A during a second firing of thrusters to nudge the 2,000kg telecommunications satellite towards an operational orbit.

Seventeen and half minutes after lift-off, GSAT-6A was left in GTO to make its way to its final geostationary orbit, 36,000 km above the surface of the planet at a longitude of 83 degrees east.

The second… possibly not so good. On 31 March the LAM was fired for 53 minutes. Four minutes after firing, the satellite went dead.

ISRO has remained tight-lipped as to what might have happened, but sources at the agency have begun muttering about a failure of the power system.

GSAT-6A is planned to be a 10-year mission, providing high power S-band communication for India. It features a six-metre antenna and will complement the existing GSAT-6 satellite, launched in 2015. Assuming scientists can get the thing to respond.

ISRO has suffered a few setbacks in the last year, with August 2017's launch of the IRNSS-1H navigation satellite scuppered by faulty pyros leaving the doomed spacecraft trapped inside the nose of the PSLV-C39 rocket.

IRNSS-1H had been launched to replace IRNSS-1A, which failed three years into a 10-year mission due to a faulty clock.

The plucky team at Bengaluru remain hopeful that GSAT-6A will eventually be salvaged rather than become an expensive, and fuelled, addition to the database of orbiting junk. ®