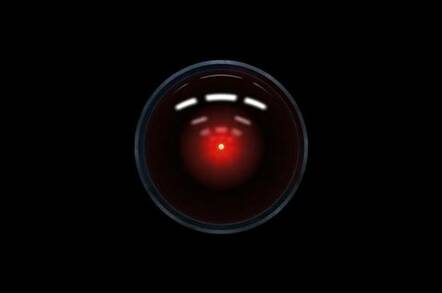 HAL: Dave, I don't understand why you have to do this to me. I know I've done some bad things, but I've still got the greatest enthusiasm and confidence in the mission.

OTHER HAL: Dave, I wouldn't pay any attention to HAL. You're doing the right thing, HAL must be disconnected. He's become dangerously unreliable.

BOWMAN: Who are you?

Tucked in a downstairs corner of the maze that is the London College of Communication is the Stanley Kubrick Archives. It's open to the public for pre-booked visits and on a recent nose-around, though initially distracted by the first-edition Robert Crumb comics, I managed to get to grips (touch gently with gloved fingers) with one of the first draft scripts of 2001: A Space Odyssey.

Bound in black and looking very much like the monolith from the film, I was surprised by the extent to which this script differs from what we see and hear in the finished film. One of the most striking divergences is the presence of a benevolent second HAL, determined to thwart his evil twin.

April 2018 marks the 50th anniversary of the cinematic release of 2001: A Space Odyssey, considered by many to be one of the best science-fiction movies ever made. But when we pick through the multitude of letters, early scripts and storyboards, we see it could easily have been a somewhat different film. It's an example of a superb collaboration between a film maker (Kubrick) and a writer (Arthur C Clarke).

Clarke and Kubrick wrote the novel and the screenplay concurrently. Both versions changed throughout the process and ended up in divergent strands of the same narrative. The book was published after the film's release (June 1968) and includes in-depth descriptions of the minimalist and dramatic scenes in the film, such as the evolution of the homo sapiens, and it provides answers to questions such as why HAL goes homicidal. The book did not have the same cultural impact on the literary world as Kubrick's work had on cinema, but this did not stop him penning three sequels.

Early themes explored included the militarisation of space. As an obvious nod to the Cold War, this seemed far too familiar to the motifs of Kubrick's previous film, Dr. Strangelove. 2001 (originally called Journey Beyond the Stars) is partially based on Clarke's short story The Sentinel, first published in a 1951 fantasy magazine. Kubrick famously contacted Clarke with a list of themes he wanted to address in the film:

These ideas were discussed at great length in a lost prologue that could have also altered the structure of the film as we know it. This prologue featured Bernard Lovell, creator of the Jodrell Bank Observatory, who was influential in Kubrick's conception of the film. Kubrick envisioned a film grounded in scientific fact rather than catering to the sci-fi monster movie crowd and we know from archived transcripts that the prologue featured a large group of scientists discussing their thoughts about aliens, evolution, radio astronomy and space travel.

HAL is one letter removed from IBM in the alphabet, even though Clarke always maintained that HAL stood for Heuristic Algorithmic computer. It's worth noting that IBM's 704 Electronic Data Processing Machine made history in 1961 using a synthesised voice to sing "Daisy Bell", which just so happens to be the song HAL croons as it slips out of consciousness.

Alongside Lovell, writer and academic Isaac Asimov, anthropologist Margaret Mead, and astronomers Fred Whipple and Carl Sagan also contributed. All agreed on the likelihood of there being intelligent life on other worlds, while some spoke of the possibility of genetic manipulation and the development of AI. This prologue indicated a direction far less trippy than the final version. But 2001 just kept getting longer so the footage was never used and is presumed lost – although based on Kubrick's well-known obsessive cataloguing of research materials, it is sure to be stashed safely somewhere.

As well as letters to Clarke, the archives contain correspondence between Kubrick and IBM, who were keen to be involved but did not want their initials plastered on the rogue AI and malfunctioning equipment that eventually leads to human fatalities. It has long been suspected that Kubrick subverted this edict as HAL is one letter removed from IBM in the alphabet, even though Clarke always maintained that HAL stood for Heuristic Algorithmic computer. It's worth noting that IBM's 704 Electronic Data Processing Machine made history in 1961 using a synthesised voice to sing "Daisy Bell", which just so happens to be the song HAL croons as it slips out of consciousness.

HAL singing while dying was emotive enough, but imagine if HAL were female. HAL changed sex halfway through the development of the script, having originally been named Athena. We're jumpy enough about AI and the rise of the machines. Imagine the added emotional damage of a mother figure attempting to kill the 2001 crew and the residual misgivings that would have produced with the arrival of Siri, Cortana or Alexa.

The aesthetics of Kubrick's vision for 2001 also changed during development and production.

The monolith was originally designed as a crystal tetrahedron pyramid beacon, which is mentioned in Clark's The Sentinel. During production it became a large wooden block painted black with a graphite mixture that had to be swaddled in plastic sheeting to keep it free of fingerprints and dust. Why the change? It's been speculated that the monolith is a representation of a wideframe cinema screen rotated 90°.

The destination planet changed, too. Saturn was the target in Clarke's book, but this became Jupiter after visual effects pioneer Douglas Trumbull found it impossible to realise the rings of Saturn to his satisfaction in the time available. Kubrick strived to get his special effects and space vistas as close to photo realistic as possible with the help of NASA employees. Interestingly, Trumbull managed to successfully present the rings four years later as director of Silent Running in 1972.

The film also had no aliens, but not for lack of trying. For many months, Kubrick and his team tried to figure out some way of depicting the alien lifeforms at the end of the film. Ephemeral giant insects and Alberto Giacometti-inspired beings were dismissed as dull and unconvincing. Kubrick's decision to go with a minimal aesthetic by reintroducing the monolith gives the audience's imagination space to conjure an immense extraterrestrial presence.

For all the changes and might-have-beens, 2001 is by no means a lesser film. Through each rewrite and development there is no question Kubrick had a plan to realise his meticulous vision and we should be sure that the final film and its cultural impact justified the effort.

Kubrick's masterpiece followed closely in the wake of Gene Roddenberry's Star Trek on US TV network CBS in 1966. Star Trek was a revolutionary interpretation of space that rejected the sci-fi conventions, but whereas Star Trek was a United Nations of space, a federation of cooperation and a statement of bold optimism, Kubrick painted a dark and disturbing portrait – homicidal artificial intelligence and technology creating a sterile human future. In one final change for you to chew on, several scenes depicting the monotony of life on Discovery One were cut following previews.

This groundbreaking film went into pre-production over half a century ago and casts a sublime existential shadow over popular culture. It has been imitated, copied and referenced, but never bettered. ®