Who wears the pants round here? We all do when on stage 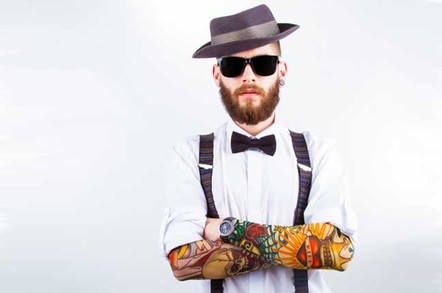 Hewlett Packard Enterprises' legal and admin division – it is bigger than you might think – has issued guidance for staff presenting to colleagues, including some, er, dress code tips for male and female workers.

Prep notes from the Office of Legal and Administrative Affairs run by John F Schultz have been seen by El Reg, highlighting what some employees may describe as a creeping culture of micro management in a corner of HPE.

Staff that are going on stage to talk to fellow employees were advised to bear in mind a study written by UCLA psychology professor Albert Mehrabian that claimed body language accounts for 55 per cent of an audience's enjoyment of a speech, with tone of voice next (38 per cent) and then the actual words used (7 per cent).

The guidance urged employees to minimise their word count on slides to "minimise distraction" and let the people "focus on you and your message".

There should be no more than 10 slides for a half-hour presentation, and the message must be limited to six points per slides and one to two lines for each point, it added.

With us so far, people? Nice.

Apparently, HPE staff should give the audience a top-level summary of their speech – a helicopter view if you like – before "you walk them through the details in the slide".

Adding pictures, tables and diagrams "from within HPE branded tools" is also a must. "Do not obtain and use materials from the Internet or outside HPE" i.e. don't source marketing material from, say, rivals... if you ever did, that is.

On to the nitty-gritty of actually delivering the speech, the Office of Legal and Administrative Affairs reiterated that "words are important" but "how you vocalise and emphasise your body language is paramount. Always consider and plan to maximise impact."

Other "advice" is to "look at the audience" you are addressing and don't forget to "be passionate and enthusiastic about your subject". And remember to "connect" with anyone else on stage in a "not too scripted manner".

Don't stand there looking agitated or uncomfortable, HPE men and women, be "relaxed, animated and authentic. Smile!" Don't play pocket billiards or fiddle with your hair.

And for god's sake "don't dance or fidget" but use "personal stories, anecdotes and examples to help your audience relate to you and your subject".

HPE-ers who read the document until the very end were warned to "rehearse" the speech beforehand – as opposed to ignoring the thing until ten minutes before and then winging it. Keeping to time was also mentioned.

For those who have got to a point in their career where they are being asked to talk on stage by their employers but don’t know how to dress themselves appropriately, worry ye not.

On "Attire", HPE said be comfortable. "Men should wear a jacket and tie. Ladies, remember "line of sight: when seated on a raised platform consider trousers or a longer skirt."

There was, however, no mention of what men should wear below the waist.

As HPE spokesman told us: "This note is simply a set of suggested guidelines for a small internal group working on a presentation. It isn’t official company policy." ®

How the mighty have fallen: Anglian Water knocks Google off perch as UK's best workplace

Facebook not even in survey's top 50, while Goldman Sachs lords it over tech's big-hitters