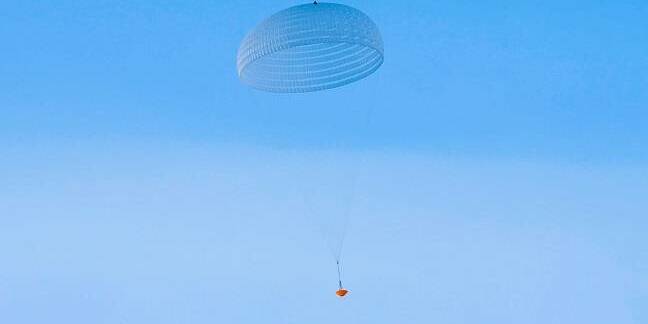 The European Space Agency (ESA) claimed today that the first test of the giant parachute destined for use by the ExoMars lander has been a success, paving the way for more ambitious trials before an eventual attempt on the Red Planet itself.

The 195kg parachute assembly was lofted to 1.2km above Kiruna, Sweden, before being dropped, while boffins kept their fingers crossed. All went well – the 4.8m wide pilot chute inflated and the 35m main chute triggered 12 seconds later.

The 500kg payload simulator spent the next two-and-a-half minutes gently descending, while pumping out real-time telemetry to anxious observers.

ESA's Thierry Blancquaert, ExoMars Carrier Module and Descent Module Manager, said: "The successful deployment of our large ExoMars parachute using a smaller pilot chute and its subsequent stable descent without damage is a major milestone for the project."

The success of this trial means ESA can move on to a test of the full parachute sequence, which will hoist the system 30km above the Earth beneath a stratospheric balloon. Releasing the parachute from that altitude will allow scientists to more accurately simulate the conditions of the thin Martian atmosphere.

Alternatively, boffins could build a MAHOOSIVE vacuum chamber in which to try the thing out. A high altitude drop is likely more cost effective.

The Register is on standby to offer balloon-related advice, should ESA require.

ExoMars 2020, which comprises an orbiter and a rover, is slated to launch on a Russian Proton rocket in 2020, with the rover due to arrive on the surface in March 2021.

ESA has equipped the solar-powered rover with a drill able to penetrate up to two metres into the Martian soil so scientists can extract samples for testing. The team is particularly interested in any organic substances that might be dragged up from beneath the surface.

Engineers are aiming to avoid a repeat of the 2016 Schiaparelli landing since another high-velocity impact would result in the rover becoming rather more closely acquainted with the ground than called for by mission parameters.

The early jettison of Schiaparelli's parachute was a factor in the hard landing of the probe and while the cancellation of a high-altitude parachute test was ruled out as a cause, ESA is taking no chances this time around.

Mars has proved a challenging target for robotic probes – the ESA currently enjoys a 100 per cent failure rate in terms of landers. Boffins will be hoping bad luck does not come in threes. ®