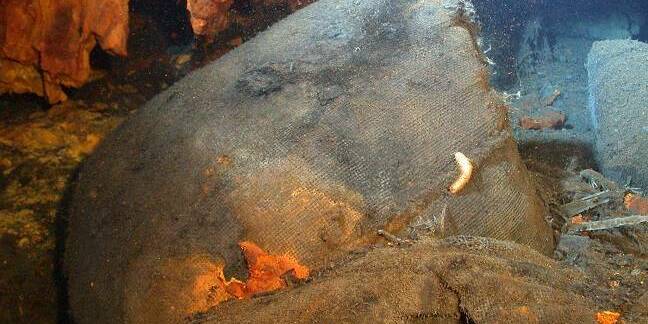 The London Postal Museum has opened a wartime mailbag to the public in "Voices from the Deep", an exhibition of letters discovered 4.8km (3 miles) underwater in the wreckage of the SS Gairsoppa.

The exhibition shows 70 letters from the haul of more than 700 and divides them into four categories: "War", "God and Country’, ‘Business and Daily Life’ and ‘Love and Family.’

Back in 1941, the Gairsoppa was 483km (300 miles) off the coast of Ireland when it was struck by a torpedo fired from a German U-Boat and sank. The 86 crew members all made it into lifeboats, but only one man survived the 13-day voyage to land.

The ship was arguably doomed following a mistake made in the port of Freetown, Sierra Leone, where workers forgot to replenish coal supplies in the rush to get back to continue the voyage to Britain.

That error led to the Captain making the decision, after eight weeks at sea, to leave the protection of the ship’s convoy and head to Ireland to refuel.

Alone in the ocean, Gairsoppa was a “present for Hitler”, as Admiralty dispatches noted, and was holed by a single torpedo.

The ship sank in less than 20 minutes, bow-first, and was lost without trace. Thanks to its not-so-secret cargo of 200 tonnes of silver, it became a holy grail for treasure hunters.

The silver-seekers were less interested in the 1,765 tonnes of tea onboard, enough to keep up the spirits of thirsty Londoners for three weeks as war raged.

The wreck was discovered in 2011 by US company Odyssey Marine Exploration. Between 2012 and 2013, valuable cargo was recovered including some interesting archaeological artefacts and what marine archaeologist and guest curator Dr Sean Kingsley described as “a lump of black slime”.

Scientists peeled back the layers of sediment and discovered the remains of one of the 190 mail bags carried by the Gairsoppa. Thanks to the coating of sediment, and the extreme cold and dark, the letters had survived the passing of time relatively unscathed.

The Mail Museum, with additional funding from London’s V&A, acquired the letters at the beginning of 2017.

The contents range from joy at a marriage proposal, distress at a lost business opportunity and some particularly gruesome descriptions of injuries and illnesses suffered by expatriates in the colony.

Intriguingly, in this limited sample at least, wartime censors seemed much more concerned about the contents of letters headed to Scotland rather those destined for the suburbs of South East England.

The exhibition runs until January 2019 and the Exhibitions Officer, Emma Harper, told us the letters may be rotated since the museum is not keen on exposing the paper for more than six months at a time, even under protective glass and dim lighting.

Following the end of the exhibition there are tentative plans to take the letters on a tour of the UK.

As for the future, Kingsley reckoned a return to the ship to retrieve more mailbags was highly unlikely: “The Gairsoppa project is done and dusted – 99 per cent of the silver was found and brought up”, so there is little financial imperative to spend any more time on the wreck.

However, a follow-up project called “Late Mail” is underway at the museum to try and track down some of the recipients of the letters of their descendants.

Both Harper and Kingsley were enthusiastic about the project, although Kingsley described the task as “super difficult – none of these people are in India any more. This started as news and then it became history.”

The Register reckons a determined visitor would be able to get around the large room housing the letters in an hour or so, with audio and video exhibits complementing the displays.

The exhibition runs at The Postal Museum from 29 March 2018 to 13 January 2019 with adults able to visit for £11 while children go free. Of course, you may want to pay a little more and get a ride on the underground Mail Rail as well. ®

Social simulation in an era of social distancing

Fright at the museum: Bored curators play spooky Top Trumps on Twitter over who has the creepiest object

This hack owes it all to a dalliance with a TMS9900 40 years ago. How about you?