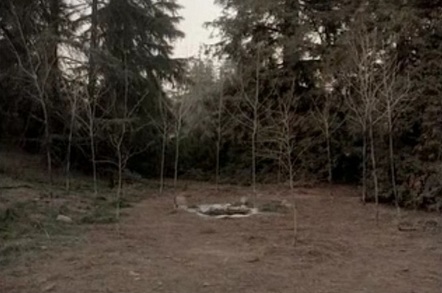 Glastonbury Grove in the mysterious town of Twin Peaks, Washington, is also a bridge between two worlds (Pic: ABC)

Called BlackBerry Enterprise Bridge, the new software allows work to flow between the old Good Dynamics container – now called BlackBerry Dynamics – and Microsoft apps. So if you receive a document with one identity in the Works sandbox, you can open it and edit in the Microsoft InTune sandbox.

Companies use containers to limit clipboard functions and Save As functions in mobile document viewers and office suites. Previously, the Dynamics user could open a document from Dynamics in a certified office suite like Polaris or SmartOffice, but couldn't use Microsoft's office software.

Frank Cotter, SVP for Enterprise at BlackBerry, said the approach to the security of Good and BlackBerry – once bitter rivals but now under the same roof – heralded from different directions.

"BlackBerry came from a [BlackBerry Enterprise Server] heritage, from a corporate liable point of view, while Good came more from a BYOD world," Cotter said.

The difficult part, Cotter told us, was that Microsoft apps are "multi-persona... I can sign in as Frank Cotter on my Gmail account, or my work account. Depending on which ID I use to sign in dictates how apps behave."

This raises some far-from-trivial security issues the team had to surmount.

"Bridge uses both Microsoft and BlackBerry SDKs, and we've filed patents on how we do that," Cotter told us.

In addition to Bridge, BlackBerry has added more management support for gadgets such as – among other things – a Do Not Disturb feature to BlackBerry Work, and allowing guest workers to share an iPhone more securely.

BlackBerry said the inter-container feature will cost money but can't say how much. ®