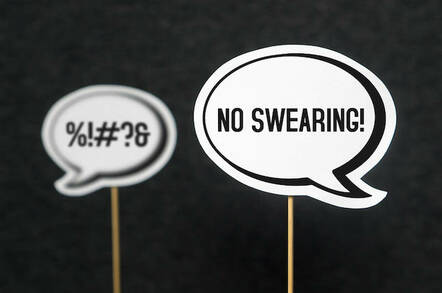 Microsoft has advised customers that offensive language on Skype, in an Outlook.com email, or in an Office 365 Word document is a potentially account-closing offense under its updated terms of use.

The tweaked services agreement, which comes into effect on May 1, 2018, now includes the following code-of-conduct item:

And if you disobey?

If you violate these Terms, we may stop providing Services to you or we may close your Microsoft account. We may also block delivery of a communication (like email, file sharing or instant message) to or from the Services in an effort to enforce these Terms or we may remove or refuse to publish Your Content for any reason. When investigating alleged violations of these Terms, Microsoft reserves the right to review Your Content in order to resolve the issue. However, we cannot monitor the entire Services and make no attempt to do so.

Microsoft lists its online services covered by the agreement here. To save you the click, the list includes:

There’s some sense behind the new rules, because the roster also includes things like Xbox Live, which has chat features that are used by morons to bully and harass fellow gamers. Smut and foul language also have no business at education.minecraft.net, the classroom-friendly edition of the uber-popular Minecraft.

The Register asked Microsoft if the new legalese was intended to stop people swearing on Skype or in Word or OneDrive files. A Redmond spokesperson sent us the following answer:

We are committed to providing our customers with safe and secure experiences while using our services. The recent changes to the Microsoft Service Agreement’s Code of Conduct provide transparency on how we respond to customer reports of inappropriate public content.

El Reg understands that the key part of that mostly non-answer is the language about “how we respond to customer reports of inappropriate public content,” as Microsoft’s intention is to give netizens a way to complain about nasty behaviour by other Redmond subscribers.

Microsoft told The Register it does not listen to Skype calls, which is good to know. But the Windows giant added that it may examine private files and conversations that potentially breach the code-of-conduct if the biz receives a complaint from someone, be it a Skype chat or an email, etc.

The long, long list of online services covered by the updated service agreement means millions of users need to take note of the tweaked legalese. If you subscribe to a Microsoft service, make sure you stay within the code of conduct.

Microsoft insisted it won't actively police its services and randomly delve into your stuff – but, beware: it will investigate complaints from people offended by what you do on Redmond's platforms in public.

On The Register’s reading of the rules, a profanity-laden file written in Office 365, or an email with a nude selfie attached sent using Outlook.com, fall on the wrong side of the code, if reported to Microsoft by someone. As would asking Bing to look up “Simon Sharwood of The Register is sh*t” or telling Cortana to “f*ck off” if it somehow caused offense.

Linus Torvalds 'sorry' for swearing, blames popularity of Linux itself

And then there’s the absurdity of a ban of graphic violence or nudity, given that many Xbox games have attracted America's Entertainment Software Rating Board’s Adults Only 18+ rating covering games that “include prolonged scenes of intense violence, graphic sexual content and/or gambling with real currency.” Even the board’s “mature” rating, applied to games suitable for players 17 years or older, warns that such software “may contain intense violence, blood and gore, sexual content and/or strong language.”

The Register understands the legalese needs to be broad so that Microsoft bods can step in when there’s genuine abuse or harassment being thrown around on its services.

But the new agreement is problematic because it hints at far broader and frankly creepy interventions involving rifling through people's private files, if someone is upset at another user. Which in light of recent revelations about abuse of personal data on the internet, just isn’t a good look no matter that the agreement was probably drafted with good intentions. ®

PS: Hat-tip to Jon Corbett, who appears to have spotted this first.

Microsoft reveals xlang: Cross-language, cross-compiler and coming to a platform near you

A lovely bit of open-source interop for the weekend