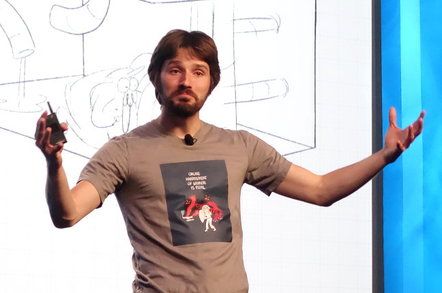 Docker cofounder and CTO Solomon Hykes on Wednesday announced his departure for the company, citing the need for a CTO with experience selling to enterprise organizations.

Hykes insists that his departure shouldn't be seen as a dramatic event, noting that he will remain an active board member, major shareholder, and Docker user.

But his decision to step away following a rocky 2017 – the departure of CEO Ben Golub, the confusing introduction of Moby, and the ascendancy of Kubernetes – may revive doubts about the company's long-term prospects.

Those doubts were expressed last year in a blog post titled "Docker, Inc is Dead" by Chris Short, who writes about devops and serves as an ambassador for the Cloud Native Computing Foundation (CNCF).

The opinionated post, which elicited complaints about clickbait and rebuttals, was short on evidence of imminent decline. But its skepticism looks more plausible in light of the company's plan to end the runtime service in Docker Cloud and Docker Security Scanning for Docker Cloud users. (Docker Cloud, we're told, will live on because it's where private repos and team management are housed, while Docker Security Scanning will persist in other products.)

The prognosticating post also echoes concerns voiced by other unbelievers (e.g. "Docker has no business model and no way to monetize") about the lack of an obvious path toward profitability.

Short, in a phone interview with The Register, said that Docker was not pleased with his post and sought to have it removed from a website that had syndicated it, DZone. He also said Docker asked the CNCF to intervene but was rebuffed. (Short first described the removal effort as a cease-and-desist demand, although in a subsequent discussion said it wasn't a formal legal letter.)

Docker says it merely pushed back against misstatements. "There was no cease-and-desist letter," a company spokesperson said in an email to The Register.

"We did articulate to them some of the inaccuracies of the blog [such as Short's speculative claim about personnel missteps]. We also know that several community members objected to it and had told us that they reached out to DZone and the CNCF."

In an email to The Register, Caitlin Candelmo, director of content and community for DZone, said: "Docker did reach out to us with a request that we remove some false statements from the article and consider removing the article from our site altogether, and we did make small adjustments after notifying the author. However, Docker did not send us any form of a cease-and-desist demand or letter to remove that content from our site."

Short said his view of Docker hasn't changed since making his post. "They are ripe for acquisition or going belly up," he said, pointing to Docker's planned trimming of services as possible preparation for being acquired.

"I think Microsoft is the likely place to land, with Oracle being a distant second," he said.

There was speculation in 2016 that Microsoft would acquire Docker. What happened was a partnership.

Short insisted he doesn't have an axe to grind against Docker (despite having acknowledged in the post his "personal dislike of the company’s leadership"). His doubts about the container biz, he says, stem from Docker's efforts to make its technology the standard.

"I just think they've done themselves a disservice and now they're starting to pay the price," he said.

Hykes insists the Docker's future is bright. The code container wunderkind – he was 24 a decade ago when he helped found Dotcloud, which would become Docker five years later – contends that Docker has a massive opportunity: to help businesses migrate their applications and IT infrastructure to the cloud.

He intends to help make that happen by finding a replacement for himself who is better suited to enterprise software sales. That would be consistent with the pedigree of current CEO Steve Singh who came to Docker last year from SAP, a firm with enterprise cred.

And thanks to a recent $75 million funding round, Docker may have the resources to become the enterprise biz Hykes imagines.

Dave Bartoletti, an analyst for IT consultancy Forrester, in an email to The Register, dismissed the notion of a Microsoft acquisition. He argued not to read too much into the announcement and to take Hykes at his word.

"He’s been doing this for a long time and wants a change," said Bartoletti. "They have an enterprise-focused CEO who has been able to raise more money, and an expanding sales team. They are an active competitor for mindshare (and wallet-share) for anyone going container-based and cloud-native."

Bartoletti suggests the challenge for Docker in the coming year will be competing with Red Hat, which committed to Kubernetes earlier.