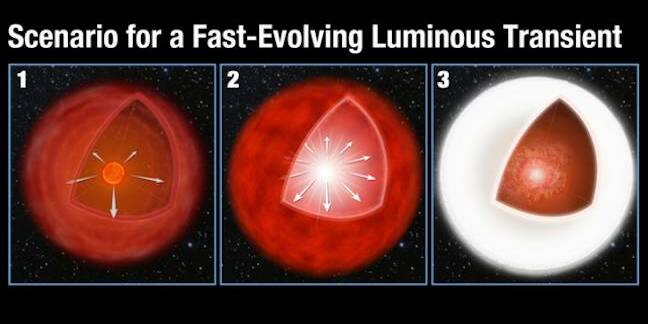 NASA image: star ejects a sphere of gas, and explodes, lighting up the gas

When a star goes supernova, it gets very, very bright, very, very quickly, then spends a good few months fading away. But boffins have now reported that an object named KSN 2015K faded away in just a fortnight.

KSN 2015K was spotted by ground-based instruments in Chile and Australia, but was over so fast that astro-boffins thought it was an asteroid. But as Dr Brad Tucker of the ANU explained to Vulture South, it turned out to be a new kind of supernova.

Tucker was part of a team led by Dr Armin Rest of the Space Telescope Science Institute in the US and UC Berkeley PhD scholar David Khatami, whose paper about the object - KSN 2015K - will soon be published by Nature Astronomy.

Tucker told El Reg the discovery of KSN 2015K was possible due to data gathered by the now-doomed Kepler space telescope.

He said a supernova that hits peak brightness in 2.2 days and “fades in a couple of weeks” is “mind-boggling”.

The researchers spent a lot of time going over Kepler's “thousands of data points” to make sure it was not a mistake or a glitch. Deciding the observations were a real event, the next task was to work out what had happened, and Tucker said that came from modelling by Khatami.

His work suggests the star had previously ejected a sphere of gas and dust. This “near death” experience, Tucker explained, has been seen before (for example, in the case of Eta Carinae in 2012).

When KSN 2015K, hidden by that sphere, exploded, the shock wave was so huge it lit up the “cocoon” almost instantly.

“This is a different way that stars explode”, Tucker said.

A star undergoing core collapse will ignite a nickel 56 reaction, creating intense radioactive energy that's relatively long-lasting, he explained. In this case, however, the shock wave imparted huge kinetic energy to the gas and dust, and it lit up “really quickly”.

The other reason a ground-based telescope would miss an event like KSN 2015K is that at 1.3 billion light years away, its brevity could easily be explained on grounds of distance and dimness.

“It's been hinted before that this kind of object exists,” Tucker said, but with ground-based instruments “the record for something we think is similar to this is four data points”.