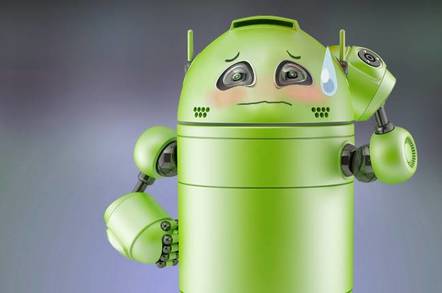 The US Court of Appeals for the Federal Circuit in Washington DC has revived Oracle's bid to bill Google for billions over its use of copyrighted Java APIs in its Android mobile operating system.

On Tuesday, the appeals court reversed a 2016 jury finding of fair use that deemed Google's actions acceptable, and sent the case back to federal court in California to determine damages, which Oracle in 2016 said should amount to about $8.8bn.

Figures cited in the court ruling suggest Google has generated $42bn in advertising from Android, which is made available to consumers for free, with contractual requirements for handset makers.

The case was first filed in 2010 and initially included a patent infringement claim. The patent claim failed but Oracle's copyright claim was upheld in 2012.

The jury at the time was unable to decide on whether Google's use of Oracle's Java APIs could be excused as fair use, so District Court Judge William Alsup ruled that Java APIs are not protected by copyright law, a decision hailed by many Silicon Valley as a means to ensure unconstrained code interoperability.

Oracle appealed and in 2014, the US Court of Appeals for the Federal Circuit overturned Alsup's decision. Google asked the Supreme Court to intervene, but the Supreme Court declined to hear the case. The case went back to Alsup's court where the jury concluded Google's infringement of Oracle's copyright should be excused as fair use.

Oracle appealed again, and finally has been vindicated. The appeals court ruled that Google's use of the Java APIs fails to qualify as fair use under the law and that Oracle's claim for damages must be considered.

"But where, as here, the copying is verbatim, for an identical function and purpose, and there are no changes to the expressive content or message, a mere change in format (e.g., from desktop and laptop computers to smartphones and tablets) is insufficient as a matter of law to qualify as a transformative use," the appeals court's ruling stated today.

Fair use still possible, but not for Google

The appellate judges state that they are not dismissing the possibility of a fair use defense in any case involving the copying of computer code. But they find Google's usage of Oracle's Java APIs falls short of the requirements under the law.

In a statement emailed to The Register, J. Michael Keyes, a partner at law firm Dorsey & Whitney who focuses on intellectual property law, said the decision has huge implications if it stands.

"One of the key arguments Google made was that using the [Java] API packages for cellphones was 'transformative' for purposes of fair use," said Keyes.

"The appellate court rejected that. What this means is that simply porting the work (even a small portion of it) to a new platform or medium doesn’t mean you are transforming the underlying work. The old adage that 'the medium is the message' doesn’t necessarily fly in the context of fair use."

Part of Google's defense was that the 11,500 lines of copied code were insignificant compared to the millions of lines of code in Android. The appeals court rejected that by asserting the quality and importance of the copied portion must be considered alongside the quantity.

"The Court held that no reasonable jury could have considered the copying 'qualitatively insignificant,'" said Keyes. "That’s a pretty bold statement for an appellate court to pronounce, which means future litigants need to focus like a laser on how important the copied portion was relative to the greater whole."

"The Federal Circuit's opinion upholds fundamental principles of copyright law and makes clear that Google violated the law," said Dorian Daley, EVP and general counsel at Oracle, in an emailed statement. "This decision protects creators and consumers from the unlawful abuse of their rights."

Still up for a rumble?

Google hasn't yet decided whether it will challenge the ruling.

“We are disappointed the court reversed the jury finding that Java is open and free for everyone," Google spokesperson Patrick Lenihan said in a statement emailed to The Register. "This type of ruling will make apps and online services more expensive for users. We are considering our options.”

Corynne McSherry, legal director for the Electronic Frontier Foundation, a cyber advocacy group that has supported Google's position in this case, slammed the reversal and suggested it bodes ill for small software firms.

"This entire case has been a travesty start to finish," she said in an email to The Register. "First, the Federal Circuit has no business resolving a copyright fight between two California companies. Second, having taken jurisdiction the Federal Circuit has apparently decided to continue its anti-innovation tradition by wreaking as much havoc in copyright law as it has with patent law.

"Consider what happened here: the court rejected the district court’s first finding on copyrightability, thereby forcing everyone to go back to court on fair use – and then rejected that finding as well. If I were a small software company I would be terrified."

McSherry said she expects Google will seek a Supreme Court review. "While it’s always an uphill battle, I don’t think they have much to lose at this point," she said.

Keyes suggested the Supreme Court has reason to revisit the interplay between fair use and copyright law.

"In 2015, we saw a huge fair use decision out of the Second Circuit in favor of fair use for Google books," he said. "We now have the biggest fair use case since then – also involving Google – where the Federal Circuit found no fair use as a matter of law.

"Two fair use cases; two different circuits; both involve cutting edge tech; and they came out in opposite directions on the central issue. Maybe there is enough of a 'circuit split' there for the Supreme Court to take a look at Oracle v Google. Also, fair use is such an integral piece of the puzzle in just about every copyright case. That reality may help pique the Court’s interest." ®