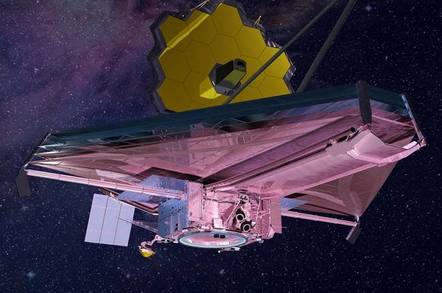 The launch date for the James Webb Space Telescope has been kicked back a year to 2020, NASA confirmed during a press conference on Tuesday.

The instrument – a 6,200kg (13,668lb) telescope designed to look at stars formed soon after the Big Bang as well as closer objects – was scheduled to launch into the heavens in October this year. Technical problems pushed that back to May 2019. Now NASA says that will slip to May 2020 at the earliest, and indicated that the $8bn plowed into the project may not be enough to complete it.

“With all the flight hardware 100 per cent complete, we’re approaching the finish line for launch readiness. However, it looks like we have a ways to go before we cross that finish line,” said Thomas Zurbuchen, NASA associate administrator for science.

The telescope is being put together by Northrop Grumman. The team has run into various problems, particularly with the propulsion system. In testing, a transducer was found to be incorrectly powered and in need of replacement, which set the project back three months.

Dennis Andrucyk, deputy associate administrator for NASA's Science Mission Directorate, said these were avoidable errors, however, they happened because humans are human, and, well, we all make mistakes.

To operate effectively, the telescope needs to be kept cool from the Sun's light, regardless of whether it is direct sunlight or reflected from the Earth and Moon. To do this, the 'scope will be shrouded in five layers of material, each the size of a tennis court when laid out.

The cables intended to keep the Sun shield in place were worryingly slack, it was discovered, so engineers have added springs and other new hardware to keep them taut enough to do the job. The eggheads also noted seven tears in the shield, none bigger than four inches. These need to be restitched, and the cause of the tearing needs to be locked down.

NASA has a problem. It's running short of cash. If it goes one dollar over the $8bn allocated to the entire project, the 'scope's extra funding will have to be reauthorized by US Congress.

Acting NASA administrator Robert Lightfoot said an independent review board has been appointed to investigate and tally up the costs. It will report in June. The project is expected to overrun its budget.

"From analysis we know the most obvious answers on funding are wrong," Lightfoot said. "You can’t just multiply the historical funding run rate with the extra time needed to finish and get a figure. The run rate slowing down rapidly as we reach the completion of the project."

While it's unlikely that Congress would pull the plug on the project at this late stage, there is precedent for politicians to cut off funding – in 1993, after spending $2bn on the Superconducting Super Collider. The SSC would have had three times the power of CERN's Large Hadron Collider. It was sold off, and the site is being used as a datacenter instead.

NASA is also making personnel changes: four senior managers from the space agency's Goddard center will be stationed at Northrop Grumman to help iron out the wrinkles with the project, and the European Space Agency will also lend a hand.

Although Hubble will remain operational into the mid-2020s, the James Webb telescope is a different kind of beast and a much more powerful one. As it's going to be positioned a million miles from Earth, repairs in space will be impossible so it needs to work right first time and stay working. That requires a lot of testing and engineering time, yet Congress could decide it's had enough of the whole thing.

Lightfoot indicated NASA may have money in a rainy day fund to finish the project, if necessary, but that would throw other experiments and instruments into doubt. We'll know in June what the final bill will be. ®