First there were notebooks. Then tablets. And now ‘book tablets’ 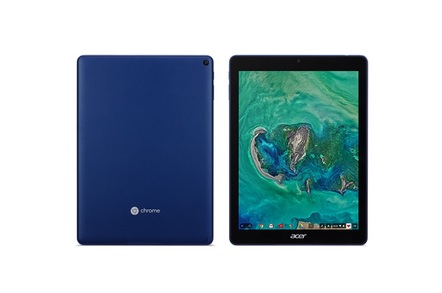 Google and Acer have given the world its first Chromebook Tablet.

The Acer Chromebook Tab 10 takes Google’s OS, slices off its keyboard and runs it on a 9.7-inch tablet that has an utterly anodyne design.

There’s also a battery-free Wacom stylus and a slot for it to live in, a USB 3.1 Type-C Gen 1 port, speaker/headphone/microphone jack and a Micro SD card reader.

The device is administrable using Google’s Chromebook-wrangler for schools and can work with the ad giant’s Play app bazaar.

Google reckons the device’s big selling points are portability and touch-screen interactivity, AI-fuelled software that makes for better on-screen writing and a dock that should help prevent the device being damaged.

The Register reckons the device’s immediate virtue is that it’s gathered some attention a couple of days before Apple makes an education-centric announcement widely expected to include cheaper iPads for schools.